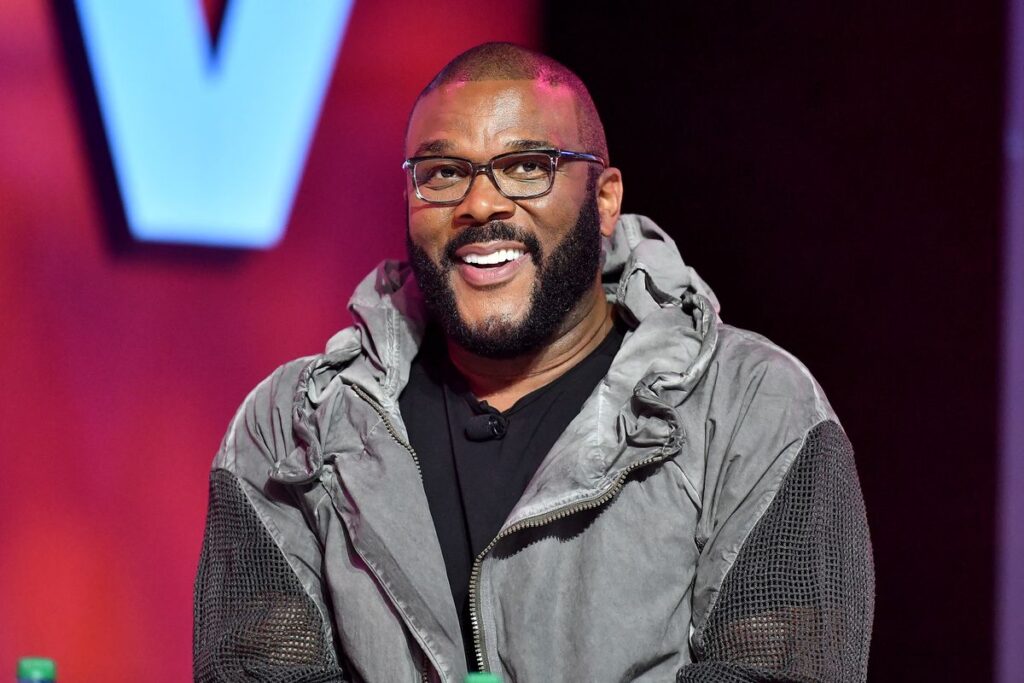 Aerial photos emerged on Friday offering the first look at the 35,000 square foot estate being constructed on 1,200 acres of land near Perry’s studio in Georgia.

The movie mogul owns properties in Los Angeles and Atlanta, but the sprawling mansion is set to be Perry’s most extravagant residence yet as it’s expected to include an airplane hangar and runway for his private jet, TMZ reports.

Perry was first reported to be building the home in 2018 after spending several years working on the design and construction.

The estate now appears to be inching towards completion, according to the photos.

And it appears the 50-year-old Hollywood tycoon is pulling out all the stops, with plans for a massive lap pool and an organic farm with horses and other animals for his son.

The stunning images show a long, landscaped driveway lined with trees will lead to an impressive grand entrance.

The backyard is expected to be just as lavish, with a giant swimming pool and hot tub already caved out.

The home boasts both peace and privacy as its tucked away in the woods outside of the city – but still conveniently located near his 330-acre production studio.

The photos have emerged just months after it was revealed Prince Harry and Meghan had been staying at Perry’s $18million Los Angeles mansion.

Perry is also known for flipping properties and in 2018 sold a mansion in Mulholland Estates private community in Beverly Hills to Happy singer Pharrell Williams for $15.6 million.

Earlier this week it was reported that Perry has become a newly minted billionaire, according to the latest calculations from Forbes.

Perry, 50, has said he was once ‘poor as hell’ and homeless, dropped out of high school and struggled as a playwright before his career catapulted him to stardom.

He then became the first African American to independently own a studio.

He credits much of his wealth to the importance of ownership and Perry has invested in several properties, as well his 330-acre studio location.

‘Ownership changes everything,’ he said an interview with Forbes.

The publication estimates that Perry has earned ‘more than $1.4billion in pretax income since 2005′, as it placed him in the billionaires’ club and predicted that he could be added to The Forbes 400 in the future.

He has used some of this wealth to buy homes in Atlanta, New York, Los Angeles and Jackson Hole, Wyoming, as well as two planes.

Among his investments was the establishment of Tyler Perry Studios in Atlanta, now the most prolific production location for black audiences. The company was first started in 2006 before settling in its current location five years ago.

Perry paid $30million for the studio property in Atlanta in 2015 and spent $250 million building the studio operation there.

It is located on a former confederate stronghold and has expanded so much that it is now more than twice the size of the Warner Bros. Studio in Burbank, California.

Holding ownership of the studio is also set to make Perry even richer as it increases the money he gets back from a production.

‘I own the lights. I own the sets,’ he told Forbes. ‘So that’s where the difference is. Because I own everything, my returns are higher.’

Perry owns 100 percent of the content he makes, meaning he’s created himself a back catalog of movies, TV shows, and plays that are worth $320million.

The New Orleans-born producer owns the rights to 1,200 episodes of TV shows, 22 movies and at least 24 plays, Forbes states.

He used that powerful back-catalog to establish a deal with Viacom that sees them spend $150 million a year until 2025 to produce at least 90 TV episodes annually.

Perry also has $300million in cash and investments, a $60million equity stake in BET+ and $40million in homes and toys.

The actor’s story is a classic rags to riches tale, being born into poverty in New Orleans.

‘I love when people say you come from ‘humble beginnings’,’ he joke to Forbes. ‘[It] means you were poor as hell.’

Perry said that he ‘had no mentors’ on his way to the top, and has learned on the fly, suffering an upbringing with an abusive man who he later learned was not his father.

‘You got to understand, I had no mentors,’ Perry told Forbes. ‘My father doesn’t know anything about business, and my uncles and mother, they know nothing about this. I didn’t go to business school. Everything I’ve learned, I’ve learned in progress.’

After dropping out of school, he first worked at the Windsor Court Hotel in New Orleans, where he would sneak into the annual National Association of Television Program Executives conference.

He later began to write scripts as he sold cars and worked as a bill collector.

His first steps onto the stage came when he saved $12,000 to rent a community theater space and produce the play ‘Know I’ve Been Changed’, a story of child-abuse survivors.

It was at this point Perry was forced to live in his car for three months, as he worked on everything from the lights to selling snacks in intermission to begin generating enough cash again to be able to afford rent.

He struck gold with his iconic character Madea, which drew the attention of Oprah Winfrey.

Before he even made a film or TV show, Perry wracked up $100 million from theater ticket sales, moved $20 million worth of merchandise and collected another $30 million selling videos of the performances, Forbes reports.

‘I couldn’t walk down the street without people screaming, ‘Madea, Tyler, Madea!’ ‘ Perry said. ‘And then I got to Hollywood, and they had no clue. No clue to what I’d done, who I was or the following I had.’

Yet he would go on to make 11 Madea movies over 14 years with Lionsgate before retiring the franchise in 2019. It grossed more than $670million at the box office and the movies are now reverting to his control.