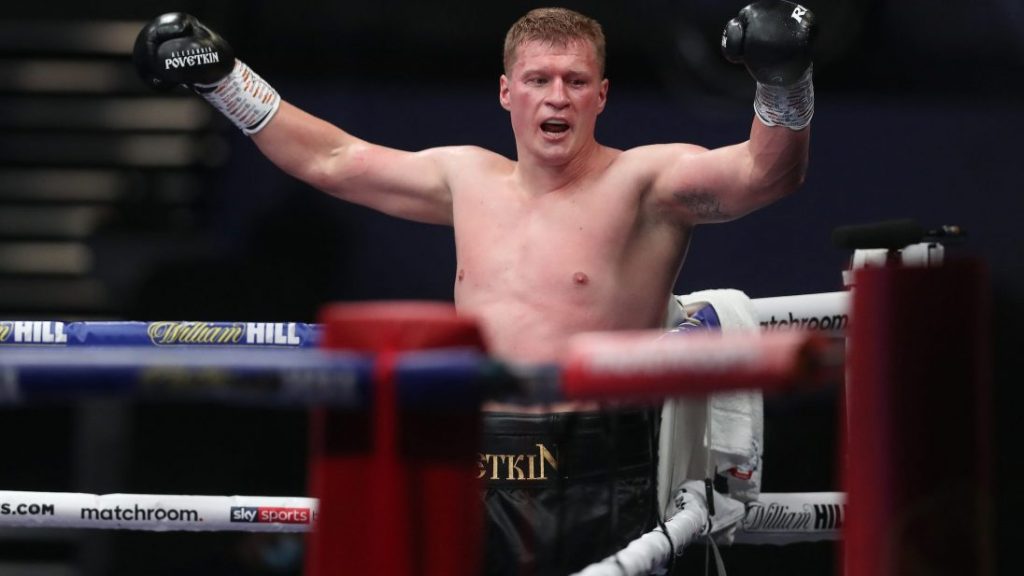 Dillian Whyte’s hopes of a world-title shot were wrecked as Alexander Povetkin twice rose from the canvas to land a stunning knockout win.

The Russian had been out-boxed for three rounds and was down twice in the fourth as Whyte mixed poise with power.

But just as Whyte appeared to be closing in on a shot at the WBC world heavyweight title, Povetkin produced a devastating left uppercut in the fifth.

Whyte, who needed treatment, will get a rematch according to Eddie Hearn.

The London fighter, 32, left without speaking to the media but was picked up by Matchroom Boxing’s Twitter channel asking promoter Hearn whether a rematch was possible this year.

“It’s one of those things, it just landed. I was bossing it. It is what it is. A rematch, let’s go,” he was heard to say.

“I can’t quite believe it,” said Hearn.

“When the punch landed I felt like I was in some dream. The fight was over virtually. Dillian was measuring Povetkin up, then two heavy knockdowns.

“I and others thought it was over. This is the drama of heavyweight boxing – one punch can change everything.

Whyte was dominant but could not find his feet after Povetkin’s uppercut.

Povetkin, who has only lost to Wladimir Klitschko and IBF, WBO and WBA world heavyweight champion Anthony Joshua in a 39-fight and 15-year-long career, simply found “the best punch he has ever thrown” according to BBC Radio 5 Live’s Steve Bunce.

With no fans in the garden of Matchroom Boxing’s headquarters, the jubilant celebrations of Povetkin’s team were all there was to hear as Whyte lay, almost motionless, on his back.

The British heavyweight had been just about punch perfect for 12 minutes. Shots to the body left red marks on 40-year-old Povetkin, while jabs to the Russian’s face looked to be discouraging the underdog.

Two hard right hands and a short left hook combined sweetly to floor Povetkin in the fourth and, before the bell, Whyte drove home a left uppercut when backed to the ropes to send his rival down again.

But moments later the tables turned and Povetkin dipped to his left and thrust an uppercut of his own on to Whyte’s chin.

Povetkin had been written off as past it by some, while others point to two drug bans as evidence he should not be in the sport. The devastating nature of his finish will only serve to underline the threat he continues to carry, however.

Since his only previous defeat, by Joshua in 2015, Whyte – who also served a drugs ban in 2012 – has put solid names on his record.

His refusal to simply sit and wait for his world title chance endeared him as a risk taker to fans and undoubtedly improved him as an athlete and fighter.

But one punch ultimately proved why this is a risky strategy and he must now get back to work if he is to revive his hopes of a first world-title shot.