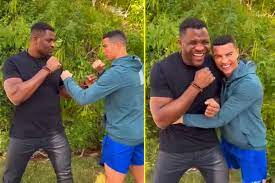 Cristiano Ronaldo and UFC heavyweight champion, Francis Ngannou have shared a jocular face-off as the two sportsmen met in Saudi Arabia on Saturday.

The pair squared up to one another in a funny video, though Ronaldo quickly decided to de-escalate the situation.

He burst out laughing and decided to hug Ngannou ultimately, rather than fight him.

Ronaldo now plies his trade with Al-Nassr having recently left Manchester United, by mutually agreeing to terminate his contract.

Though he is yet to make his debut for his new side, his first appearance in Saudi Arabia came in an exhibition match against Lionel Messi’s PSG in a Riyadh All-Star XI.

Ngannou, on the other hand, is currently fighting as a free agent.

While on his travels, he decided to link up with Ronaldo this weekend.