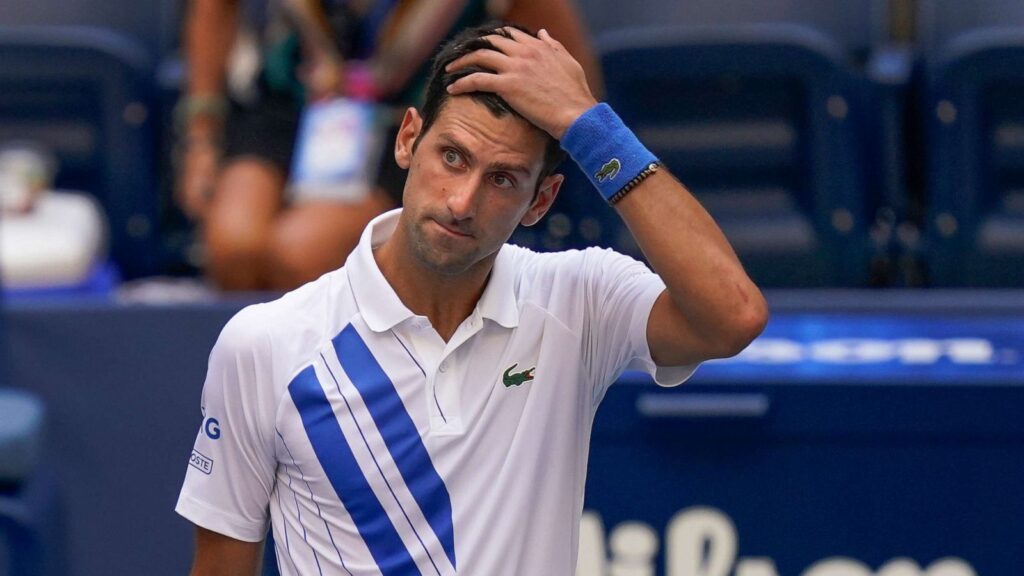 Reactions were mixed after Novak Djokovic’s disqualification from the U.S. Open for striking a line judge with a ball during his match against Pablo Carreno Busta on Sunday.

Following the incident, the US Tennis Association issued a statement saying that Djokovic would lose all the ranking points earned from the event.

He will also be fined the 250,000 dollars prize money for reaching round four.

“In accordance with the Grand Slam rulebook, following his actions of intentionally hitting a ball dangerously or recklessly within the court or hitting a ball with negligent disregard of the consequences, the US Open tournament referee defaulted Novak Djokovic from the 2020 US Open.

“Because he defaulted, Djokovic will lose all ranking points earned at the US Open and will be fined the prize money won at the tournament in addition to any or all fines levied with respect to the offending incident,” the statement said.

Busta was left in shock after the incident, saying, “I never expected this moment playing against Novak. So, it was a tough moment also for me.

“I think this was not intentional,” the Spaniard told reporters. “I don’t think that anyone of us, the players, do this (intentionally).

“It’s just I broke his serve and he threw the ball. I think that it was bad luck, no? You cannot do this, but of course, I think that Novak never, never wants to hit the line umpire.

“I’m so sorry about that because it’s not the way that I want to be in (the) quarter-finals.”

Alexander Zverev told reporters after his own fourth-round win that he was still in shock over the incident.

“I’m a little bit in shock right now, to be honest.

“It’s very unfortunate that he hit the line judge, and especially where it hit her,” Zverev told reporters.

Former champion Mats Wilander, analysing the action for Eurosport, a television station, said it was very unlucky for Djokovic but that it had been the correct decision.

“You are not allowed to do that,” he said. “It’s as much bad luck as you can have on a tennis court. He didn’t just roll the ball back to the ball kid. That’s the bottom line.

“He hit it harder than he intended to, obviously a complete accident. It was a sign of frustration, yes. A little bit. But it doesn’t matter, you are not allowed to do it.”

“Novak Djokovic defaulted for inadvertently but stupidly hitting a lineswoman in the throat with a ball and the officials had no choice but to default.

Billie Jean King, 12-times Grand Slam singles champion also tweeted, saying it was an unfortunate incident but added that the rule was the rule.

“I hope the line judge is okay,” she wrote on Twitter.

“The rule is the rule. It is unfortunate for everyone involved, but in this specific situation the default was the right call.”

Tim Henman, a former player noted that the referee made the right decision, saying every player has to be responsible for his actions.

“He was not aiming for the line judge, but has hit the ball away and you have to be responsible for your actions.”

Alex Corretja, a former French Open finalist, said the incident had changed the future and history of tennis.

“It’s amazing how one centimetre can change not only the match, but the future of our sport, the history of our sport,” he said.

“With the rule as it is, you need to disqualify him. It’s obvious they had no other choice, it’s a pity…”

Tim Mayotte, a coach and former player, said the mistake was a common phenomenon with every high-performance player he has trained.

“Almost every high-performance player I train does what Novak did in firing the ball,” he posted on Twitter.

“I tell them to stop it, and break the habit for this exact reason, they eventually hit someone and it won’t be good. Yes, Novak deserved it.”

Australian tennis player, Nick Kyrgios on his part, chose to see the funny side of the issue, describing it as a “Swap me for jokers incident”.

“Accidentally hitting the ball kid in the throat’ how many years would I be banned for? 5? 10? 20?” he wrote on Twitter.

A clearly sad and frustrated-looking Djokovic stormed out of Flushing Meadows.

He refused to speak to the media and offer a public apology for the incident that led to his shock fourth-round disqualification at the US Open.

The Serbian star will now also face a fine for missing his press conference, according to the tournament’s rules.