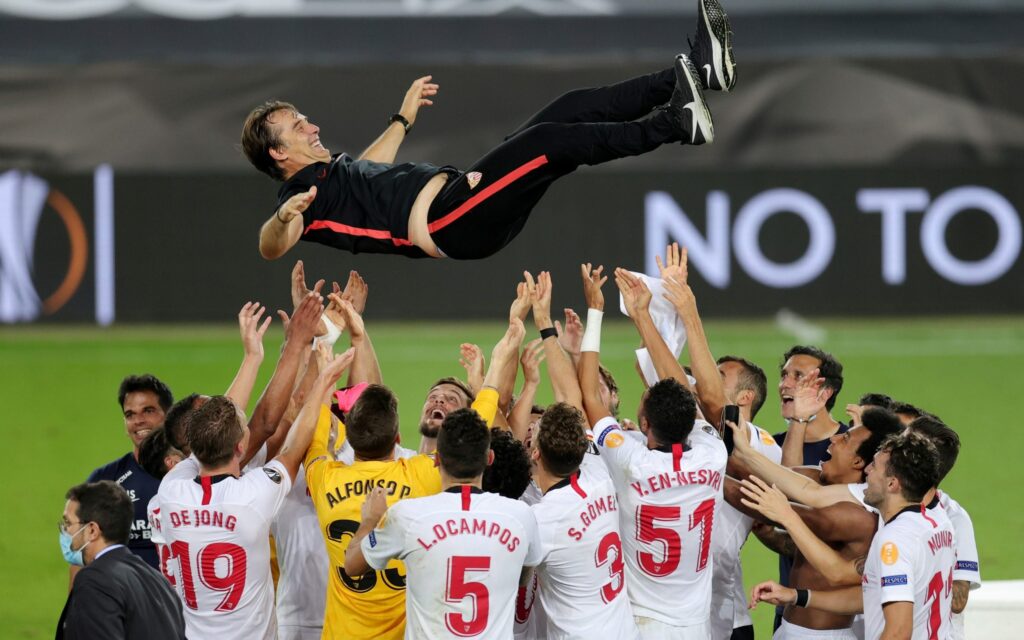 Sevilla won the Europa League for a sixth time as Diego Carlos’s overhead kick deflected in off Romelu Lukaku 16 minutes from time to beat Inter Milan 3-2 in a thrilling final in Cologne.

Carlos and Lukaku’s evening had got off to a very different start as the defender hauled the Belgian striker down and he converted the resulting penalty to put Inter in front after just five minutes.

Two Luuk De Jong headers turned the game around for Sevilla, but Diego Godin quickly levelled in a four-goal first half.

However, Italy’s wait for a first European trophy in a decade, and Inter’s nine-year trophy drought, goes on after Lukaku could not stop Carlos’s spectacular strike on another famous Europa League night for Sevilla.

Antonio Conte’s men will have a case that the Sevilla defender should have been sent off after just three minutes as Lukaku accelerated past him with ease on the counter-attack and was hauled to the ground by the Brazilian, who conceded an early penalty for the third consecutive game.

Carlos was only shown a yellow card, but Lukaku ensured Inter were rewarded as he confidently slotted home his 34th goal of the season to equal his idol Ronaldo’s record in his first season at Inter, which ended in Inter’s last UEFA Cup win 1997/98.

FIFA Cancels Next Round Of International Fixtures Outside Europe, Exempt UEFA

De Jong has been far from that prolific in his first season in Spain, but the Dutch international suddenly hit form at the right time as he was handed a start by Julen Lopetegui after coming off the bench to score the winner in the semi-final against Manchester United.

Inter did not learn from that goal against the English giants.

Jesus Navas was again the provider and when De Jong got across Godin, his diving header had too much power for Samir Handanovic.

Tempers were also flaring in a pulsating first half with frequent confrontations between the benches as they tried to influence Dutch referee Danny Makkelie.

Conte was booked as Inter appealed for a second penalty when Nicolo Barella chipped ball into the arm of Carlos.

Sevilla upset the odds when they came from behind to beat Liverpool for the fifth Europa League title four years ago and did the same to another European giant when De Jong rose highest to loop a brilliant header over Handanovic from Ever Banega’s free-kick.

However, the lead only lasted three minutes as Godin made amends with a bullet header of his own as the Uruguayan became the first defender to score in a Champions League and Europa League final.

Both sides had conceded just once in three games since arriving in Germany and after four goals inside 36 minutes, Conte and Lopetegui restored some semblance of order to their defences at the break.

Inter were made to rue wasting the better opportunities in the second half as Navas and Carlos converged to block Roberto Galiardini’s effort.

Lukaku then had the chance to cap his excellent first season in Italy as he raced through on goal 25 minutes from time, but just as in the semi-final victory over United, Sevilla goalkeeper Bono produced a vital save when needed.

And like so many of their previous five Europa League final victories, Sevilla conjured up a moment of magic allied with a slice of fortune they needed to again take the trophy they call their own back to southern Spain.

Inter failed to clear another Banega free-kick into the box and Carlos more than made amends for some of his heavy-handed defending with an overhead kick that deflected in off the unfortunate Lukaku.

Conte threw on the former Premier League trio of Christian Eriksen, Alexis Sanchez and Victor Moses in response and it was Sanchez who had the chance to make himself a hero by taking the game to extra time.

But the Chilean failed to get enough purchase on his shot among a goalmouth scramble and Jules Kounde cleared off the line.