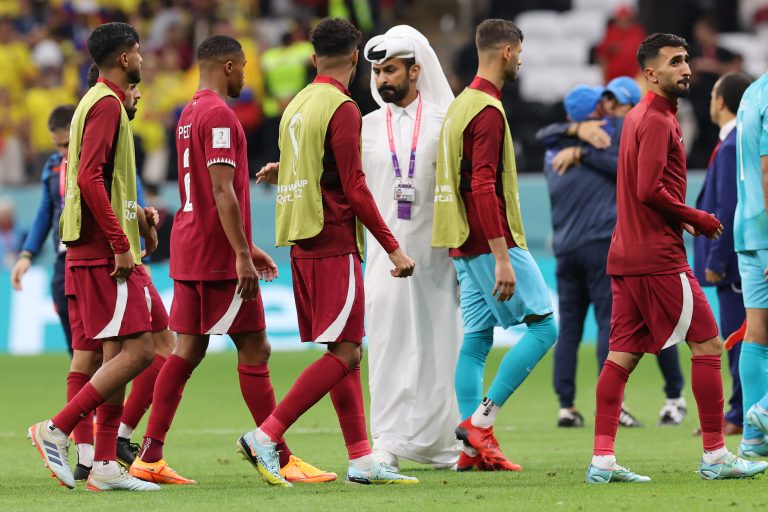 Qatar became the first home team to lose their opening World Cup match as Ecuador cruised to a 2-0 victory over the hosts, with Enner Valencia scoring twice in the tournament curtain-raiser on Sunday.

Asian champions Qatar enjoyed the backing of the 67,000-strong crowd Al Bayt Stadium, but could not follow a glitzy opening ceremony with a statement performance.

Ecuador thought they had made a dream start when Valencia headed in in the third minute, only for the goal to be ruled out by VAR for an offside in the build-up.

It was only a brief reprieve for Qatar, with Valencia putting the South American side ahead from the penalty spot in the 16th minute before doubling his tally just after the half-hour mark.

Qatar improved in the second period, but by the end of the 90 minutes the buzz of the opening ceremony was a distant memory.

“Our nerves betrayed us, we started really badly,” said Qatar coach Felix Sanchez. “We were unable to string together four passes in a row.”

Qatar will likely need to avoid defeat in their second Group A match against Senegal on Friday just to prevent the ignominy of becoming only the second hosts, after South Africa in 2010, to be dumped out in the first round.

Hopes were high among the crowd that Qatar could make a winning start, but the deficiencies of the World Cup debutants were ruthlessly exposed by an impressive Ecuador.

“It was a day we all dreamed of,” said Ecuador left-back Pervis Estupinan. “We are all very proud. We all know what an incredible captain we have with Enner Valencia.”

Qatar failed even to muster a shot on target in the game, with spectators filing out of the stands long before the final whistle.

The South Americans had the ball in the net inside three minutes when captain Valencia nodded home from Felix Torres’s miscued overhead kick.

VAR officials spotted an offside against Michael Estrada in the build-up after Torres challenged for the ball with Qatar goalkeeper Saad Al Sheeb.

Ecuador were completely dominant in the early exchanges and were awarded a penalty after Valencia was tripped by Al Sheeb when through on goal.

The former West Ham forward coolly sent Al Sheeb the wrong way from the spot, stroking the ball into the bottom corner.

Ecuador did not have to wait long to double their advantage. After a surging run from Moises Caicedo, right-back Angelo Preciado swung in a cross which Valencia met with a thumping header.

Even the small section of noticeably enthusiastic Qatari fans behind the goal, who arrived later than most of the crowd and wore matching T-shirts, briefly fell silent.

Almoez Ali, the hero of Qatar’s 2019 Asian Cup success, should have pulled one back on the stroke of half-time but could only steer a free header wide from eight yards out.

Ecuador allowed Qatar more of the ball after the break but still looked the more dangerous side, with Romario Ibarra bringing a diving save from Al Sheeb.

Valencia hobbled off in the 77th minute after being on the wrong end of a series of heavy challenges.

“I hope to be ready (for Friday’s game against the Netherlands),” said the forward after taking knocks to his knee and ankle.

By the time the official attendance of around 67,000 was read out over the tannoy, the stadium was barely half full.