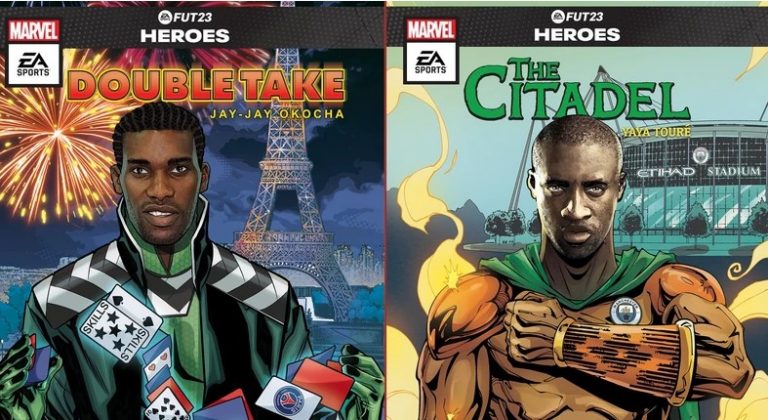 EA had earlier announced a collaboration with Hollywood and Comic book giants Marvel Entertainment, as the duo united to bring more of football’s fan favourites back to the pitch in FIFA 23, by transforming FUT Heroes into Super Heroes.

This past week, EA and Marvel have unveiled brand-new superheroes featuring a host of football icons such as Jay-Jay Okocha, Yaya Toure, Claudio Marchisio, Park Ji-Sung, and a host of others.

Super Eagles legend Jay-Jay Okocha and Ivory Coast legend Yay Toure who are the only confirmed ex-African football stars have made the top five highest-rated items following the stat reveal of the FUT Heroes list.

Okocha and Toure were both awarded an OVR of 89.

Jay-Jay Okocha and Hidetoshi Nakata will no longer be FUT Icons in FIFA 23 because they are both being launched as FUT Heroes.

In FIFA 23, EA will introduce a brand-new set of FUT Heroes, with a total of 21 new goods to be published, following the introduction of the new player items in FIFA 22.

For 21 of the chosen FIFA World Cup FUT Heroes goods, the distinctive illustrated designs will take the place of real-world player images in-game for the first time in the 14-year history of FUT.

Here are all the confirmed ratings for all the new Heroes set to feature in FIFA 23.