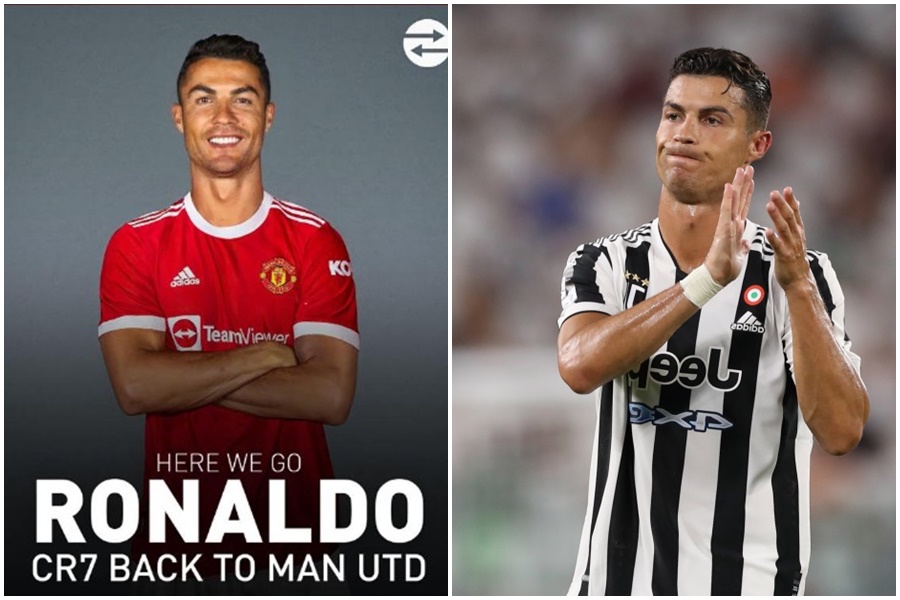 Manchester United have confirmed that it is a done deal with Juventus on Crisitiano Ronaldo’s move back to the England club.

Though the player’s medical is to be completed soon, he has accepted the proposal from Manchester United.

According to Skysports, Manchester United is offering 25m euros to Juventus for the superstar. The goal machine was also offered a two-year contract to return to Old Trafford.

He will be earning £480,000 a week, Football transfer expert, Fabrizio Romano, who broke the news said.

Ronaldo won the first of his five Champions League titles and was first crowned the world’s best player during six years at United between 2003 and 2009.

“I didn’t think Cristiano was going turn out leaving Juventus. It’s been speculation the last few days, of course.

“We’ve always had a good communication. I know Bruno (Fernandes) has been talking to him as well. He knows what we feel about him. If he was ever going to move from Juventus, he knows that we’re here.”

Manchester Cityhad been in pole position to land what would have been the biggest signing in the club’s history as they look for a replacement for Sergio Aguero.

However, according to reports in England, they withdrew their interest.

City manager Pep Guardiola insisted he will be happy with his squad even if they do not add another striker before the end of Tuesday’s transfer deadline.

“Cristiano will decide where he wants to play, not Manchester City or myself. Right now it looks far, far away,” said Guardiola.

“These type of players decide. They knock the door, they call and after there are situations I cannot control. It is not my business.”

Ronaldo’s contract in Turin running until 2022 and the italians are reportedly holding out for a transfer fee in the region of 25 million euros ($29 million, £21 million).

“Yesterday, speaking with Cristiano, he told me that he has no intention of staying at Juventus, for this reason he will not be picked tomorrow. This morning he didn’t train,” Allegri told reporters ahead of Juve’s Serie A match against Empoli on Saturday.

“He was here three years, he made his contribution, he made himself available to Juventus and now he’s leaving. Life goes on,” added Allegri.

Ronaldo won two Serie A titles with Juventus, but his time in Turin has not lived up to expectations.

He joined 2018 after scoring a remarkable 450 goals in 438 matches in a glittering nine-year spell at the Bernabeu that also included four Champions League triumphs.

Last season, they were deposed as Italian champions by fierce rivals Inter Milan and had to wait until the final day of the campaign to secure qualification for Europe’s top club competition.

However, Ronaldo still topped the Serie A goal charts last season, edging out Romelu Lukaku, who joined Chelsea this month for £97 million.

And he also rolled back the years at Euro 2020 to win the Golden Boot despite playing just four games as Portugal bowed out at the last 16.

United have already significantly strengthened their squad with the signings of Jadon Sancho and Raphael Varane during the transfer window as they aim to win the Premier League for the first time since 2013.