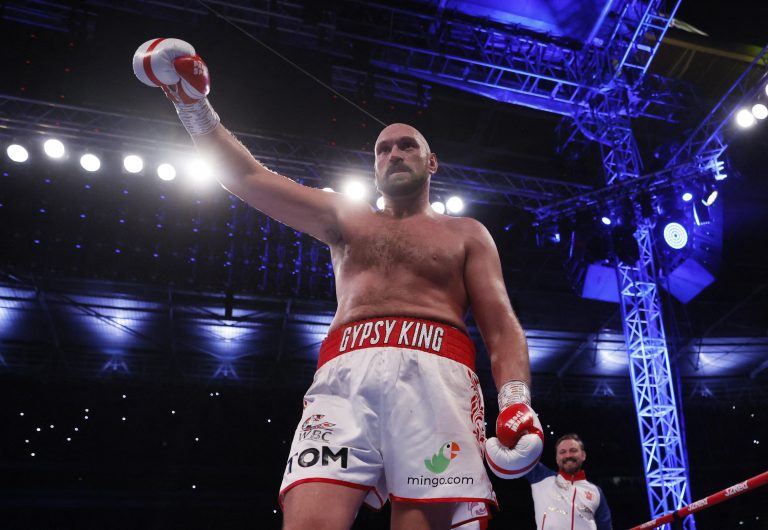 British professional boxer and WBC champion Tyson Fury has revealed that only a a whopping £500m sum can tempt him out of his decision to retire from the boxing ring.

Fury made the revelation to TalkSport’s Simon Jordan , insisting that he remains retired as things stand.

British boxer, Anthony Joshua is set for a rematch with his conqueror last year Oleksandr Usyk of Ukraine and Fury said he would consider returning to face Usyk, who he expects will beat AJ once again in August.

It was subsequently reported that this could see him back in a £200million mega deal, but the Gypsy King refuted this on Wednesday morning and named his true price.

He told White and Jordan on TalkSport: “Even that £200million report today, that didn’t even tempt me.

“I am telling you the truth, if you want me out of retiremeu’nt it’s gonna cost half a billi.”

The rematch between AJ and Usyk is for the WBA, IBF and WBO belts, which Joshua, unfortunately, lost via points in the first meeting last September at the Tottenham Hotspur Stadium.

After some delay, the pair will finally go head-to-head for the second time in less than a year this August in Saudi Arabia opening up space for a potential undisputable heavyweight fight with Fury.

“He ain’t a virgin anymore, he’s been battered from pillar to post by a fat man on three weeks’ notice and by a middleweight.

“Usyk hasn’t [been beaten], but that’s a middleweight coming up from cruiserweight to heavyweight, none of my interest at all.”

However, when asked to confirm if he would come back to fight the winner for huge money, Fury replied: “If it’s half a billi, then I won’t say no, will I?

“What you’ve gotta do is go and get half a billi, and then the Gypsy King will come out and solve all his problems for him.

“Because if AJ gets beat again off Usyk, then there’s only gonna be one man to redeem this great fighting nation of the United Kingdom and he goes by the name of Tyson Fury.

“I can solve all the problems, the embarrassment, all that stuff that’s gonna happen.

“One call, but it’s gonna cost half a billi.

Fury then turned his attentions to Jordan and added: “Simon Jordan – you’re in charge of getting me that half a billi…

“When I’m down in London next time, I’ll come on your show and you can give me a proper grilling.

“But you’re in charge of getting me that half a billi.”

The Gypsy King concluded by responding to suggestions that he’s afraid of facing Joshua.

“He’s got a chin of granite, heart of gold, he’s got everything that a fighting man should have.

Anthony Joshua Is The Fastest Puncher Since Tyson- Tony Bellew