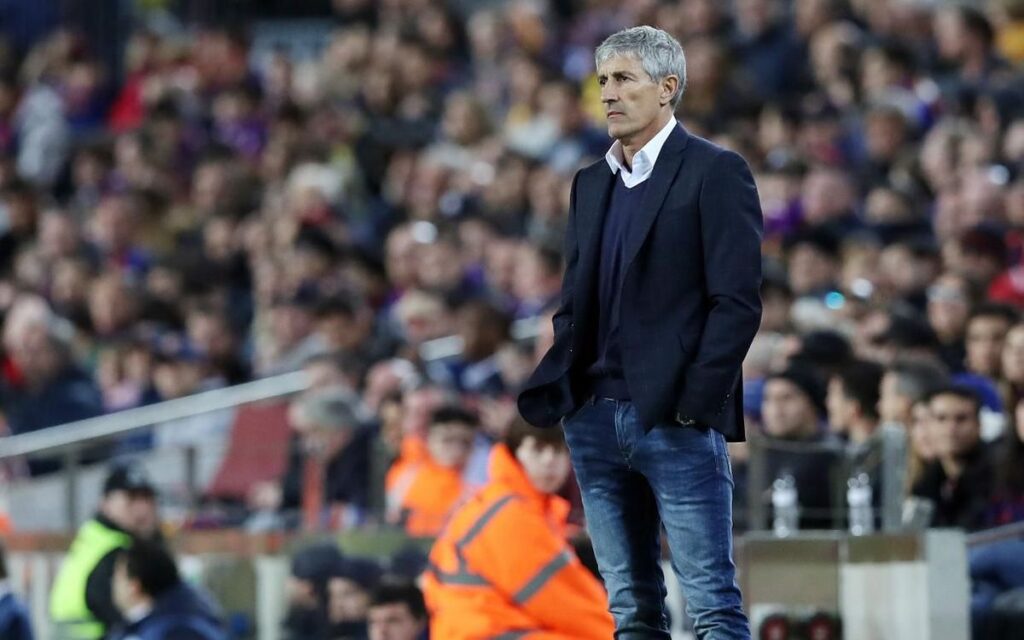 Barcelona have sacked Quique Setién as coach of the first team with a new manager set to be announced later.

“The new coach will be announced in the coming days as part of a wide-ranging restructuring of the first team,” Barca tweeted on Monday.

Setien was only appointed in January but has paid the price for Barca surrendering the La Liga title to Real Madrid and then being humiliated by Bayern Munich in the Champions League.

His exit was finalised during an emergency board meeting at Camp Nou, which lasted almost six hours and saw Koeman emerge as the favoured choice to take charge.

The club also announced next year’s presidential elections, scheduled for June, will be brought forward to March 15.

Angry supporters had hoped they would be held immediately but that possibility was ruled out, meaning under-fire president Josep Maria Bartomeu will continue.

“After analysing all the options, the Board considers that this (March 15) is the most viable date for holding these elections,” the statement continued.

“The Board understands that the immediate call for elections is not feasible considering the league will begin on the weekend of September 12 and due to the economic and social framework caused by the Covid-19 crisis.”

Setien’s successor will still be under pressure to deliver quickly given a new board next year could install their own coach, with Xavi Hernandez linking himself to rival presidential candidate Victor Font.

Koeman has been in charge of the Dutch national team since 2018 and is due to lead them at the postponed European Championship next year and the World Cup in 2022.

Mauricio Pochettino was also considered but his previous comments dismissing Barca due to his links with rivals Espanyol have counted against him.

Koeman and his agent were negotiating a two-year contract on Monday night, according to reports in Spain, with the second year dependent on the outcome of the presidential elections.

He enjoys hero-status at Barcelona after starring for them as a player under Johan Cruyff and scoring the winning goal in the 1992 European Cup final.

But his coaching career has been mixed and he would arrive at a club in crisis, with one of his first tasks to persuade captain Lionel Messi not to depart.

Shortly before the board meeting began on Monday, sources at Barcelona insisted the club had not heard anything from Messi about wanting to leave.

But the 33-year-old has grown increasingly frustrated in recent months and a report from Esporte Interativo on Sunday claimed he has made up his mind to find a new club this summer.

Gerard Pique said he would depart if it was necessary and it remains to be seen which players are considered surplus to requirements.

Any recovery might be focused on youth, with Ansu Fati, Riqui Puig and Frenkie de Jong leading the next generation.

Koeman will know the scale of the challenge at Barcelona, where an ageing team ended up lost under Setien, who failed to convince the players of his methods.

Setien oversaw 16 wins, four draws and five defeats from his 25 games in charge.

Despite the occasional high-scoring win and some eye-catching spells of the possession football he craves, Barcelona were also ponderous, disjointed and defensively weak.

Before the three-month suspension, they lost the Clasico to Real Madrid and after it, they drew against Sevilla, Celta Vigo and Atletico Madrid.

After defeat by Osasuna effectively handed Madrid the title, Messi vented his frustration, pointedly saying the team had been a mess since January, which was when Setien was appointed.

Setien, meanwhile, admitted he had never managed a dressing room like Barca’s and few place the blame for the club’s decline at his feet.

Most of the fans’ fury is directed at Bartomeu and the board, who have alienated the dressing room and made too many mistakes in the transfer market.

There was no mention of sporting director Eric Abidal in the club’s statements and it appears he will continue for now.

Abidal drew public criticism from Messi in February after suggesting the players were responsible for the sacking of Ernesto Valverde. He is also believed to have been key to the appointment of Setien.