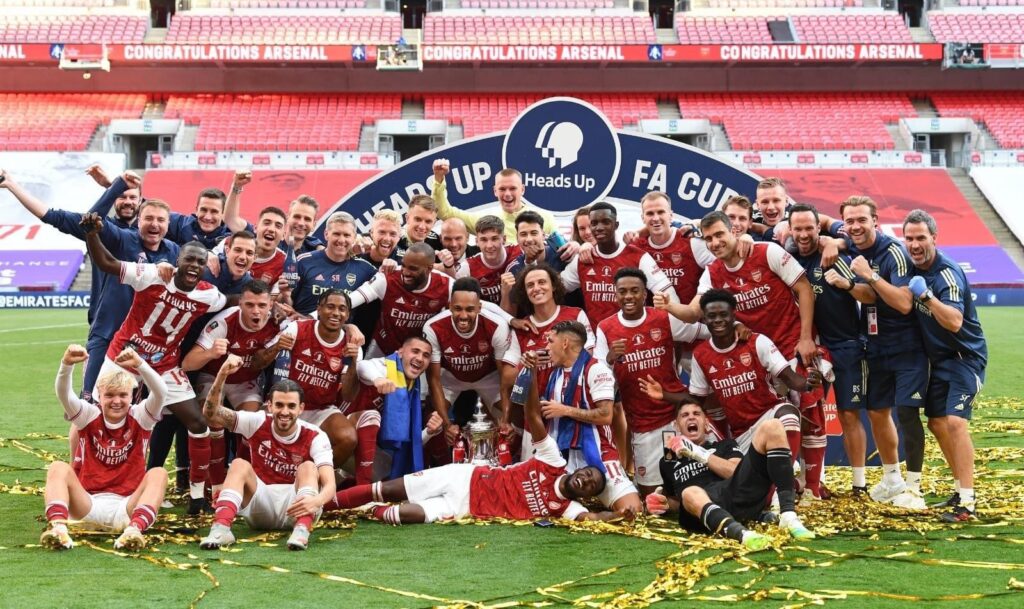 Arsenal’s talisman Pierre-Emerick Aubameyang worked his Wembley magic once again as they came from behind to beat Chelsea and win the Heads Up FA Cup for a record 14th time.

Chelsea took the lead inside five minutes through Christian Pulisic’s smart finish but then fell victim to the brilliance of Aubameyang, who was also Arsenal’s hero when he scored twice in the semi-final win over Manchester City.

The Gabon forward drew Arsenal level from the penalty spot before the break after he was fouled by Chelsea captain Cesar Azpilicueta, then produced a moment of world-class finishing to make the defining contribution to the first behind-closed-doors FA Cup final.Chelsea were hampered by a first-half injury to Azpilicueta and were struggling even further when they lost the outstanding Pulisic to a hamstring problem after the break.

As the Blues battled to overcome those setbacks, the brilliant Aubameyang was able to give Mikel Arteta silverware in his first season as the Gunners’ manager.

Aubameyang, who Arsenal are understandably desperate to secure on a new long-term contract, turned Chelsea defender Kurt Zouma inside out in the 67th minute before delivering the most audacious finish, chipping over keeper Willy Caballero from an angle.

Chelsea’s agony increased further when Matteo Kovacic was very harshly sent off for a second yellow card, awarded by referee Anthony Taylor for the most innocuous of challenges on Granit Xhaka.

Arsenal closed out the win to secure a place in the Europa League next season but it was bitter disappointment for Chelsea manager Frank Lampard at the conclusion of his first campaign in charge.

Arteta’s delight at the final whistle was obvious as he secured his first major trophy as a manager, having only succeeded Unai Emery in December.

There have been some mixed moments – but in recent weeks, Arsenal have shown their development by defeating new Premier League champions Liverpool and ending Manchester City’s hopes of retaining the FA Cup by beating them to reach the final. Now the Gunners have the trophy in their hands after seeing off Chelsea.

In each game they have shown character, courage and resilience – all qualities they have regularly been accused of lacking – and have a world-class spearhead in Aubameyang.

A player of that calibre makes the difference in the big games. Aubameyang has shown that, making Wembley his personal playground in both the semi-final and the final.

It may have been a surreal occasion, this FA Cup final played in a virtually deserted Wembley and missing so much of the traditional ceremony and atmosphere, but the joy of victory was still relished by Arteta and his players and rightly so.

And when the celebrations end, Arsenal will know with even more certainty what their summer priority must be, even above any acquisitions.

Arsenal must find a way to keep Aubameyang. Their cause is helped by being able to offer him European football, albeit the Europa League rather than the Champions League.

He is quite simply a talent that gives Arsenal another dimension of danger. He is a match-winner – and in this instance, an FA Cup final winner.