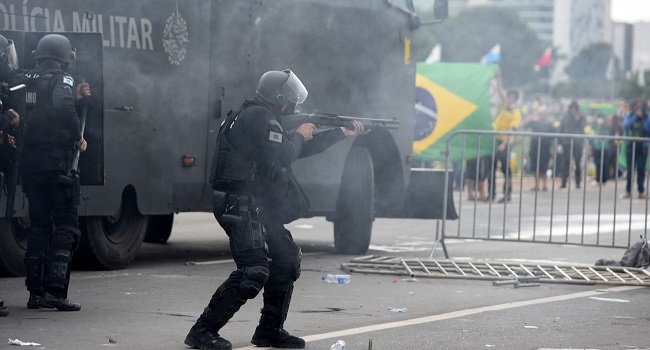 Condemnation poured in from around the world against mobs that smashed their way into the halls of power in Brazil. President Joe Biden assailed Sunday’s attacks by supporters of ex-president Jair Bolsonaro in Brazil as “outrageous”.

Biden issued his one-word verdict to reporters before later tweeting to assure his support to Brazil’s new leader, Luiz Inacio Lula da Silva, after pro-Bolsonaro rioters broke into Congress, the Supreme Court and the presidential palace in Brasilia to protest the far-right incumbent’s loss of power.

“I condemn the assault on democracy and on the peaceful transfer of power in Brazil. Brazil’s democratic institutions have our full support, and the will of the Brazilian people must not be undermined. I look forward to continuing to work with @LulaOficial,” the US president wrote.

As part of an outpouring of support for Lula after the stunning scenes in Brazil’s capital, Argentine President Alberto Fernandez also assailed the “coup attempt” by supporters of Bolsonaro.

Fellow South American leaders in Chile, Colombia and Venezuela deplored the mob action, and French President Emmanuel Macron tweeted his support for Lula, the leftist who took office as Brazil’s new president a week ago.

“The will of the Brazilian people and the democratic institutions must be respected!” Macron tweeted.

The European Union’s top foreign affairs official, Josep Borrell, tweeted that he was “appalled by the acts of violence and illegal occupation of Brasilia’s government quarter by violent extremists today…

“Brazilian democracy will prevail over violence and extremism,” he added.

Such an attack on government offices is “unacceptable and incompatible with any form of democratic dissent,” the far-right leader continued, calling for a “return to normalcy.”

The Twitter account of Democrats on the US Senate foreign relations committee noted that the Brasilia ransacking came nearly two years to the day after supporters of then-president Donald Trump stormed the US Capitol in an attempt to overturn the 2020 election, leaving five dead.

“Trump’s legacy continues to poison our hemisphere,” the tweet said.

Around the Americas, reaction was particularly swift from leaders ideologically akin to Lula.

Mexican President Andres Manuel Lopez Obrador tweeted: “Lula is not alone, he has the support of the progressive forces of his country, of Mexico, of the Americas and of the world.”

More condemnation came in from across Latin America.

Cuba’s President Miguel Diaz-Canel offered solidarity and condemned what he described as anti-democratic acts aimed at “generating chaos and disrespecting the popular will.”