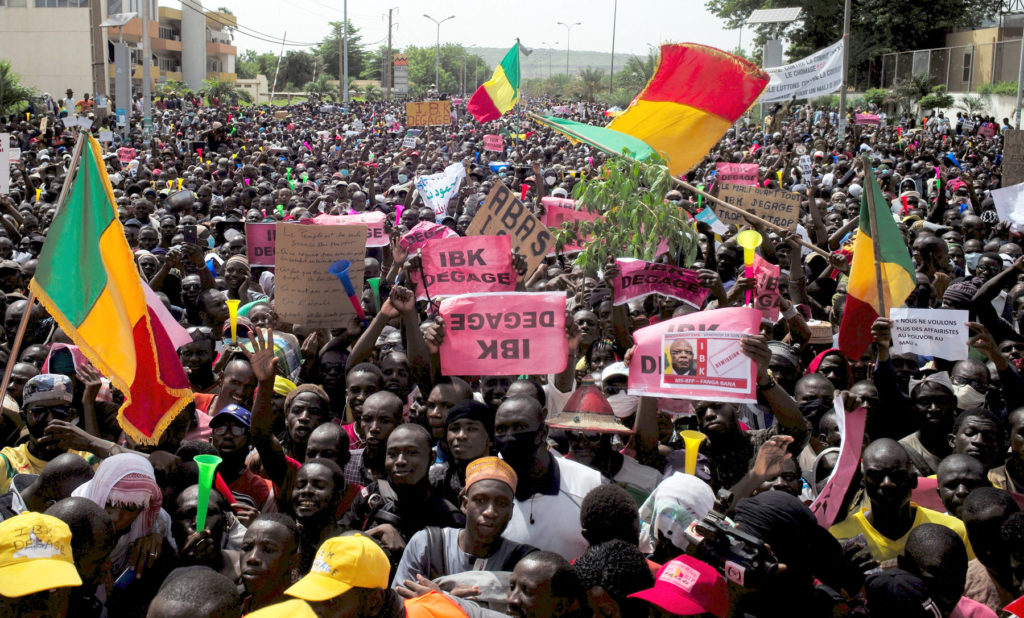 Tens of thousands of people took to the streets in Mali’s capital Bamako on Friday to demand the resignation of President Ibrahim Boubacar Keita, heeding the call of the country’s newly resurgent opposition.

The 75-year-old president is under pressure over failures to contain a jihadist insurgency that emerged in northern Mali in 2012 and spread to the fragile centre of the West African state.

Thousands of soldiers and civilians have died, and hundreds of thousands have fled their homes.

But the sclerotic pace of political reforms, a flagging economy and a widely shared perception of government corruption have also fed anti-Keita sentiment.

On Friday, an imam led tens of thousands of protesters in a prayer in a central city square.

The demonstration follows a similar rally on June 5 organised by a newly-formed coalition of opposition groups.

That coalition has since adopted the name, “Movement of June 5 — Rally of Patriotic Forces.”

Uniting religious leaders and civil society figures, the coalition is channelling deep-seated frustration about the slow pace of progress and continuing bloodshed.

At its head is Mahmoud Dicko, an imam and Islamic hardliner whose political star is rising in the war-torn country.

The June 5 movement organised Friday’s protest, despite Keita’s pledge on Tuesday to form a new unity government that would include opposition figures.

Keita was elected president of the poor Sahel nation of some 19 million people in 2013, and won a second five-year term in 2018.

He has been pushed to make several concessions in recent days in response to mounting criticism, like raising the salaries of public teachers on Tuesday after a long-running pay dispute.

The president also extended an olive branch to the political opposition on Tuesday, proposing to form a unity government.

But his efforts to appease opponents appear to have fallen on deaf ears.

Dicko had earlier told reporters in Bamako that Friday’s protest would go ahead come what may.

“He hasn’t learned his lesson, he doesn’t listen to people,” he had said. “But this time he will understand”.

Mamadou Diakite, a 42-year-old teacher at Friday’s protest, told AFP that Keita had to step down.

“We are here for the final victory, there is no negotiation possible,” he said.

The sharpening political divide in Mali is worrying the country’s neighbours.

A delegation from the Economic Community of West African States (ECOWAS) regional bloc met Mali’s prime minister as well as opposition figures in Bamako on Thursday and Friday, in a bid to defuse tensions.

It called for the creation of a “consensus government of national unity.”

The delegation said a decision by the constitutional court in late April was the source of social-political tension in the country.

The court had overturned around 30 results from the elections in March and April, including a third benefiting candidates from the president’s party.

The delegation called for the government to review the results and hold new partial elections “in the concerned districts as soon as possible.”

Court sources said four of the nine members of the constitutional court handed in their resignations on Friday.