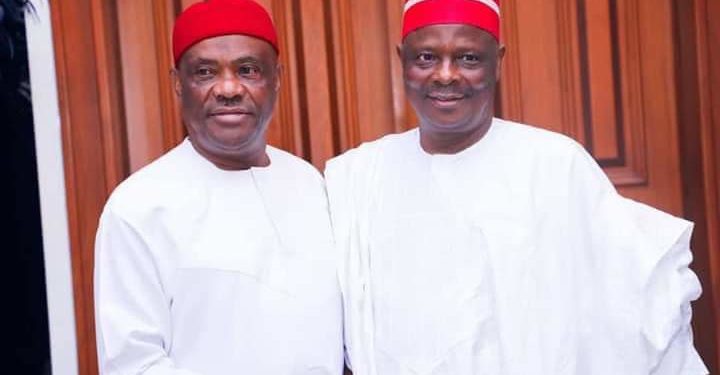 Rivers State Governor, Nyesom Wike, welcomed the presidential candidate of the New Nigeria People’s Party (NNPP), Rabiu Kwankwaso on Sunday night, to Port Harcourt, the state capital, ahead of the inauguration of the Mgbutanwo Internal Roads in the Emohua Local Government Area on Monday.

A former national chairman of the All Progressives Congress (APC), Adams Oshiomhole last Wednesday commissioned the 8th flyover in the state located on Ada George road, adjacent to the private residence of Wike in his country home of Rumueprikom in the Obio-Akpor Local Government Area.

The presidential candidate of the Labour Party, Peter Obi also commissioned the 9th flyover at the popular Ikoku junction on Thursday.

For months, Wike and four other governors of the Peoples Democratic Party (PDP) known as the G5 have demanded the resignation of Iyorchia Ayu, saying northerners should not be the PDP national chairman and presidential candidate.

However, Ayu, a Benue indigene, has insisted that he won’t step down till the end of his four-year tenure, even as the G5 made his resignation a precondition to support Adamawa-born Atiku Abubakar’s 2023 presidential ambition.

While Wike and his allies have not been seen to campaign for Atiku, it is not clear whether they will support APC’s Bola Tinubu or Obi in the contest for Aso Rock’s top job which has been described by analysts and keen observers as a three-horse race.