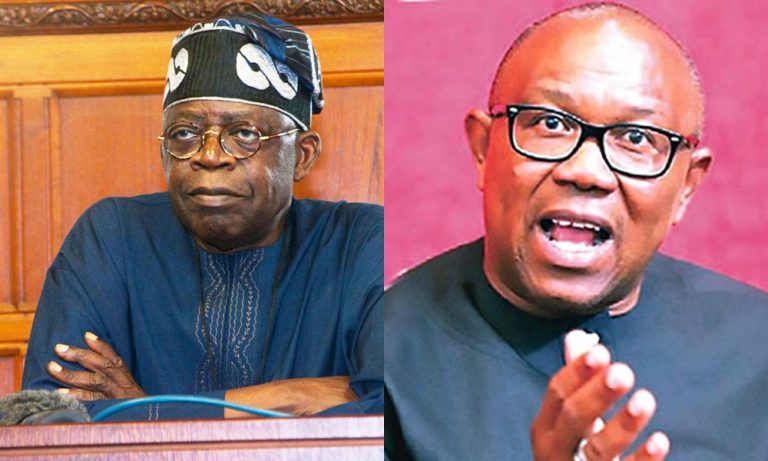 The PDP is asking the court to declare that Tinubu and Obi be disqualified unless they contest alongside their previous running mates – Kabiru Masari and Doyin Okupe respectively.

The case was instituted at the Federal High Court, Abuja.

Also sued was the Independent National Electoral Commission (INEC) and the APC.

In the originating summons with suit number FHC/ABJ/CS/1016/2022, the PDP is seeking an order barring the Independent National Electoral Commission from replacing the running mates of Tinubu and Obi.

It sought the disqualification of Tinubu and Obi if the court had found to have acted wrongly in replacing their running mate which they selected earlier as placeholders.

Those listed as first to seventh respondents in the case are INEC, APC, Tinubu, Masari, Labour Party, Obi and Okupe.

Recall that Tinubu had nominated Masari as a surrogate running mate or placeholder in order to beat the June 17 INEC deadline. Obi had also nominated his campaign manager, Okupe, as an interim running mate. However, INEC gave a grace period of about one month to substitute their names.

After weeks of consultations, Tinubu and Obi nominated Shettima and Baba-Ahmed respectively while Masari and Okupe resigned.

However, the PDP asked the court to determine if by the combined interpretation of Section 142(1) of the constitution, Section 29(1), 31 and 33 of the Electoral Act 2022, and INEC’s timetable, Tinubu and Obi are bound by the submission of Masari and Okupe respectively as their running mates.

The party also asked the court to determine if “by the combined interpretation of Section 142(1) of the Constitution of the Federal Republic of Nigeria, Sections 29(1), 31, 33 of the Electoral Act 2022, the first defendant (INEC) can validly accept any change or substitution of the 4th (Masari) and 7th (Okupe) defendants as running mates of the 3rd (APC) and 6th (Labour Party) defendants.”

The PDP is also seeking five reliefs including a declaration that by the combined interpretation of Section 142(1) of the constitution, Section 29(1), 31 and 33 of the Electoral Act 2022 and INEC’s timetable, both Tinubu and Obi must be bound by their submission.

The party asked the court to rule that both Tinubu and Obi will be disqualified the moment they substitute the names of their running mates.

One of the reliefs reads, “A declaration that by the combined interpretation of Section 142(1) of the Constitution of the Federal Republic of Nigeria 1999 (as amended), Sections 29(1), 31, 33 of the Electoral Act 2022, the 1st defendant’s (INEC’s) election timetable, the 3rd (Tinubu) and 6th (Obi) cannot validly contest  the 2023 Presidential election without the 4th (Masari) and 7th (Obi) respondents as their respective running mates.”

The PDP also based its argument on the fact that the term ‘placeholder’ is unknown to Nigerian law.

“The Electoral Act makes no provisions whatsoever for placeholder or temporary running mates. The acts of the 2nd (APC), 3rd (Tinubu), 5th (Labour Party ) and 6th (Obi) defendants in nominating and forwarding the names of the 4th (Masari) and 7th (Okupe) defendants as running mates for the 2023 Presidential elections is valid and subsisting,” the party added.

In a supporting affidavit sworn to by Evelyn Oroh, a litigation secretary in the law firm of Gordy Uche (SAN), it was stated that some of the defendants had stated openly that they were mere placeholders.

When contacted on the telephone, the Labour Party’s lawyer, Alex Ejesieme, said he had received the court processes.

“I have received the processes and we are filing a response already,” he simply stated.

The Head, Legal Directorate, Tinubu Campaign Organisation, Babatunde Ogala (SAN), said he was aware of the suit when contacted by one of our correspondents on Thursday.

Ogala, a former Legal Adviser of the APC, however, said Tinubu’s legal team had not been served a notice by the court. “Yes, I’m aware (of the matter). But they have not served us.” When asked to confirm the service, he restated, “They have not.”

Earlier, INEC National Commissioner, Festus Okoye, had in an interview with Arise TV, described the issue of placeholder as a unique invention that had no place in the constitutional and legal framework of the country.

He had said,  “Political parties’ candidates have submitted names of associates to run with them, and that is the position of the law as of today and nothing has changed.

Also, the Resident Electoral Commissioner for Osun State, Prof Abdulganniy Raji, had said, “Being a part of the umpire, I will not say I see danger or I didn’t see danger (in party submitting place holders instead of running mate).

“I will rather abide by the constitutional provisions, the extant laws. The Electoral Act makes provisions for the procedure of how to nominate and there are also provisions for the substitution of the names, either in case of death or withdrawal by any candidate, whether the substantive candidate or the running mate.”