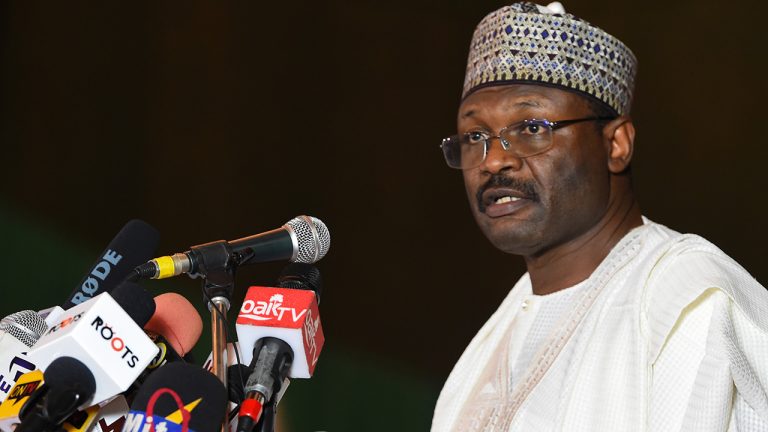 Nigeria’s electoral regulatory body, the Independent National Electoral Commission, INEC, has warned that the influence of money in politics is becoming more present, and the risk is that Nigeria may soon become a plutocracy for the rich rather than a democracy for the people.

INEC Chairman, Prof. Mahmood Yakubu, on Wednesday, disclosed this at a one-day colloquium on “Emerging Issues that will Shape the 2023 General Elections in Nigeria” organized by the Centre for Democracy and Development (CDD) in Abuja.

This, nonetheless, Yakubu said security remained a major issue of concern in the coming general elections.

At the same time, a former chairman of the commission, Prof. Attahiru Jega, who shared Yakubu’s viewpoint, also warned INEC against altering the election timetable, saying doing so would be a recipe for electoral disaster.

The duo spoke at a one-day stakeholders colloquium in Abuja on “Emerging Issues That Will Shape the 2023 General Elections in Nigeria”, organised by the Centre for Democracy and Development and Open Society Initiative for West Africa (OSIWA).

Yakubu said the act by politicians using money to sway delegates to their sides during their primaries was a thing of concern to the commission.

Compounding this concern, Yakubu said, was the increasing insecurity across the country and the issue of fake news.

He, however, assured the people that INEC would work with anti-graft agencies to reverse the trend.

“Nigeria is moving towards plutocracy. But there are two dimensions to it, when you have willing collectors, it becomes much more difficult to control the situation. We have seen cases, where voters also rejected money and voted their choice like what happened in Anambra and also there are situations where on election day, voters go after the vote buyers.

“However, right now, it is now going beyond simply the question of buying votes at polling units. What political parties do is critical to what INEC does. INEC conducts secondary elections but it is candidates that participate in the secondary elections and the way money is exchanging hands is a source of concern.

“However, we have renewed our partnership with the Economic and Financial Crimes Commission (EFCC) and the Independent Corrupt Practices and Other Related Offences Commission (ICPC) on this aspect”.

Yakubu disclosed that the commission has finalised the Regulations and Guidelines for the 2023 general election, adding that about 430 million ballot papers would be printed for the 2023 elections.

Jega, on his part, said though there have been incremental positive changes in INEC over the years, the political class has made a lot of efforts to undermine the integrity of elections.

While commending INEC for refusing to yield to the pressure of political parties to change the timetable for elections, Jega said the timetable was set under a process of very careful contemplation and in the context of the new electoral law.

According to him, shifting the timetable was a recipe for electoral disaster, “because once you shift one timeframe, it affects virtually all the others. So, frankly, I think the political parties have had opportunity to work within the timelines provided by INEC.

“They had since February to do all that is required, leading to the primaries, but because of this mentality of impunity, they always assumed that even at the last minute, they can put pressure on INEC to yield and that was what they are doing. And frankly, INEC  should never yield to this kind of pressure.

“If you change the time for primaries, it will affect everything. You know, so you have to keep on adjusting, adjusting, and you lose trust, you lose confidence, and in fact, it may even affect the actual outcome of the election. So, that’s why I think is a disaster to change it.

“But, of course, we will also expect that if INEC refuses to change the timelines, because of pressure by political parties, we do not expect INEC to also change the timetable in its own favour.

“So, it means both the Electoral Commission and the politicians and all stakeholders must work together within this timeframe. And I believe this can lead for us having credible elections that we desire in this country.”

The former Vice-Chancellor of Bayero University, Kano, maintained that the use of money in Nigerian politics was a big issue of concern, and that, rather than having improvements in that regard, Nigeria seemed to be sliding back.

According to him, with the way money was being spent by politicians, the country was moving in the direction of becoming a plutocracy rather than a democracy. Plutocracy is basically government of the rich for the rich by the rich.

While berating the National Assembly for increasing the threshold of campaign finance by political parties, he said, “Imagine, the National Assembly altered the Electoral Act to increase the threshold of how much a candidate can spend for election finance. That is something that we should all have opposed. Regrettably, we were too busy opposing the issue of electronic transmission and so on, that we lost focus.”

Senior Fellow, CDD, Prof. Jibrin Ibrahim, also decried what he termed the “extensive growth of banditry within the political class” and said elections in the country would always become a complicated issue when a significant percentage of the political class were crooks and criminals.

“When delegates collect money, they are eating the integrity of that election. Primaries are so many and we are all watching the drama with shock and manipulation is the order of the day. And how those who are involved have had the opportunity to steal public funds. Therefore, that culture of banditry and criminality controls the electoral process.”

According to him, blaming politicians alone for the rot in the system was unfair.

CDD director, Idayat Hassan, said Nigeria was faced with harsh realities, where parts of the country were embroiled in different forms of conflict and violence.

Hassan said all the threats have implications for the conduct of elections – both in terms of safety of election materials, personnel and even voters, adding that they also have the potential to affect voter turnout and the legitimacy of the result.

Director of programmes, YIAGA Africa, Cynthia Mbamalu, lamented that ‘political bandits’ had turned election to highest bidder, noting that, the high cost of nomination forms, especially, by the major political parties had kept bright minds away from the political process.

“The process is already being rigged during the primaries. Younger people want to see themselves part of the process and on the ballot. If we don’t see younger people and women participating, then, it is a challenge,” she said.