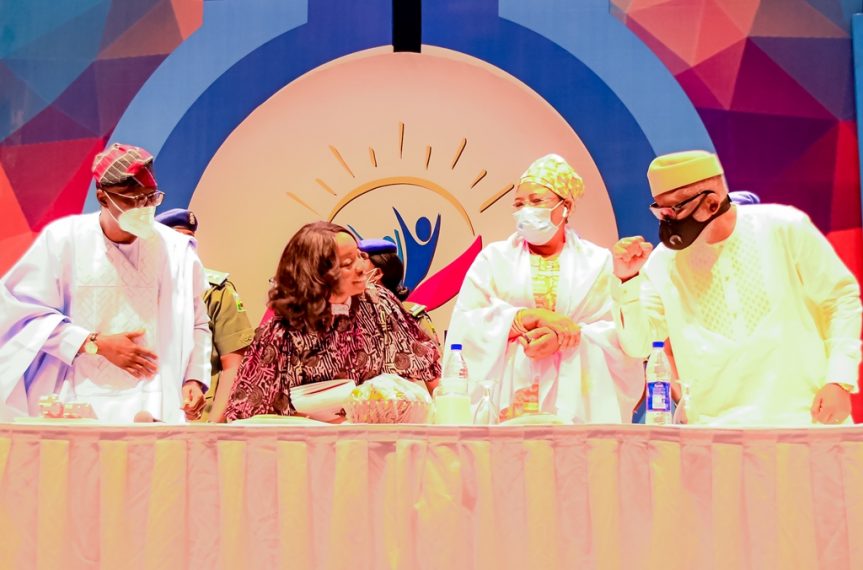 Ondo State Governor Rotimi Akeredolu and his Lagos State counterpart, Governor Babajide Sanwo-Olu, alongside the wife of the President, Mrs. Aisha Buhari, yesterday, urged more active participation of women in politics, stating that they (women) must not be confined to the back seat, as they can rescue Nigeria from its current state, if allowed to lead the country.

The trio said this at the opening ceremony of the 21st National Women Conference, NWC, organised by the Committee of Wives of Lagos State Officials, COWLSO, with the theme: ‘Awake’, held at Eko Hotels and Suites, in Lagos.

Akeredolu, who was the Special Guest of Honour, said men have failed the country, noting that women should take the lead.

“There is a need for women to start taking the issue of participating in politics seriously…Your role cannot be just jamboree – singing at political rallies. We must train the girl-child in a way that she has a role to play in the future,” he said.

“Women cannot be confined to the back seat, if Nigeria must prosper. They should either be by our side or even take the lead…Men have never led this country well; men have failed this country. Things would have been better if women had been involved…Enough of jamborees, singing and dancing at political gatherings. Women must do something.

“If the country must move forward, women must take the lead. Women are good leaders…I am ready to follow women; we must all be ready. Politically conscious women should not leave politics for men alone because men have never led this country properly…Women must embrace politics; you must go beyond the jamboree of being the best singers at political rallies, you must do something more.

“We must stop obnoxious practices which diminish the potentials of the girl-child. We must resist attempts by those who crave perpetual domination.

“We must improve on our education curriculum so that our women can enjoy true freedom in all ramifications; their freedom should not be limited.”

Also speaking, Mrs. Buhari, who was represented by the Senior Special Assistant on Women Affairs and Administration to the President, Dr. Rukayyat Gurin, urged women to use their roles for the greater benefit of the society while men should support their wives.

She said: “Lagos has set the pace for women. This conference demonstrates how powerful Lagos women have been in supporting their husbands.

“This conference would positively impact women in Lagos and Nigeria in general. I would encourage our husbands to support their wives to collectively achieve greater heights.”

On his part, Governor Sanwo-Olu said: “Awake is a clarion call to the 21st-century woman to become fully alert to her responsibilities as a pillar, enabler, and catalyst within the family, in the workplace, the civic space, and the larger society.

“It is a rallying cry to women, young and old, to be bold, assertive and fearless in the quest for a truly just, equitable and inclusive society.”

She said: “It’s time to assert ourselves and contribute positively to our society. Don’t be laid back.

“No matter where you find yourselves, always remember that you have something to bring to the table.

We all have a role to play whether you are a grandma, a career woman, housewife, entrepreneur, student or farmer.”