…announces dates for the party's senatorial campaign rallies in the state. 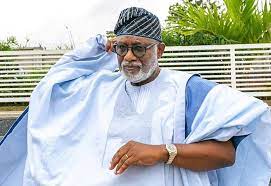 The Ondo State Governor, Mr Rotimi Akeredolu, has appeared in public after a health scare as he held a meeting with some candidates of the All Progressives Congress ahead of the forthcoming general elections in February.

In a statement issued by the Chief Press Secretary to the governor, Mr Richard Olatunde, the governor met with the candidates at the Government House, Alagbaka, Akure, the state capital, on Tuesday.

Before the meeting, the CPS to the governor had earlier in a statement, said there was no cause for alarm on the health status of his principal, saying he (Akeredolu) was “recuperating speedily”.

At the meeting, Akeredolu was said to have announced dates for the party’s senatorial campaign rallies in the state and charged party leaders and members to work hard for the coming elections.

He expressed assurance that the party would emerge victorious in the elections. He said, ” the APC is the party to beat in the state.”