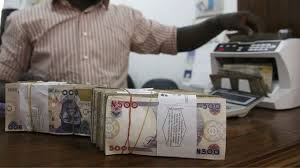 In an attempt to deposit old notes before the January 31 deadline stipulated for the phasing out of the old N1,000, N500 and N200 notes, bank customers have started rushing to banks across the country to exchange their old notes for new ones, according to findings by The PUNCH.

In an attempt to deposit old notes before the January 31 deadline stipulated for the phasing out of the old N1,000, N500 and N200 notes, bank customers have started rushing to banks across the country to exchange their old notes for new ones, according to findings by The PUNCH.

Customers on Tuesday besieged various commercial banks in the ancient city of Kano to either get the new naira notes or deposit the old notes in order to beat the January 31 CBN deadline.

It was observed that while some ATM machines were operating, many were not functioning as they were deserted.

At Zoo road, Murtala Mohammed Way and Maiduguri road where there is a concentration of banks, very few of the ATM machines were dispensing the new naira notes.

It was gathered that in some banks, old notes were still being issued to customers withdrawing over the counter, as only some lucky customers were getting the new notes.

Some of the customers, who spoke to The PUNCH at First Bank on Zoo road branch, expressed great concern over the non-availability of the new notes and the refusal of the banks to give satisfactory explanations of the situation.

One of the customers, who simply gave his name as Lawan,  said he left his house as early as 7 am in order to withdraw only N20,000 but ended up getting only N10,000 due to poor network.

“The only ATM machine dispensing new notes suddenly became faulty while I was trying to withdraw N20,000. So, I ended up withdrawing N10,000 after spending about three hours in the queue.

“None of the banks can explain the reasons behind all these happenings because to deposit the old notes or withdraw the new notes is a problem,” Lawan said.

Another customer, Adamu Abdullahi, who went to the bank to deposit his old naira notes said he spent more than four hours in the queue before he could deposit the money.

“I came here around 8:30 am but could not deposit the money until after 4 pm due to the long queue of customers,” he said.

As of the time of filing this story, many traders had stopped collecting the old naira notes due to the challenges bedevilling the entire process.

Also, there were long queues in several bank branches and ATM galleries in Sokoto on Tuesday as residents scrambled for the new naira notes.

Many banks in the state were forced to shut their gates as banking halls became full of customers seeking new notes.

The PUNCH reports that there were long queues of customers at branches of United Bank for Africa, First Bank of Nigeria Limited, Zenith Bank Plc, Polaris Bank, and Access Bank Plc, among others.

A bank customer, Alhaji Aminu Maishanu, who narrated his experience to our correspondent, said he had spent over three hours in the queue to withdraw cash.

He, however, appealed to the management of banks in the state to ensure all their ATM machines were dispensing the new notes.

He said, “The reason why we spent much time here is that only one machine out of five is working. I don’t understand why they couldn’t load other machines to make things easy for customers.

“You people are campaigning that old naira notes will not be useful beyond this month and the new naira notes are not fully in circulation, how do you explain that?”

There were long queues of customers depositing old notes in many commercial bank branches visited in Osogbo, Osun State on Tuesday.

At banks located at Station Road, Gbongan/Osogbo and Alekuwodo areas of Osogbo, many bank customers spent a long period in queues to deposit their old notes.

A customer, Haruna Ibrahim, who spoke to The PUNCH at the First Bank branch in Igbona, Osogbo, said he spent close to two hours before he could deposit his old notes.

According to him, many people, especially petty traders were becoming increasingly conscious of the date when the old notes would cease to be recognised as legal tender and were trying to beat the deadline.