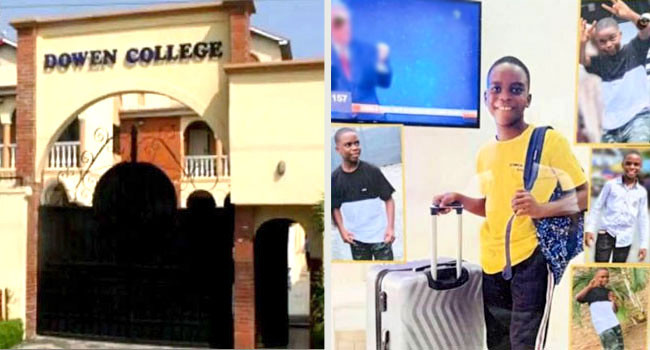 A nurse at the Dowen College, Lekki, Lagos, Omobola Kayode, on Tuesday, told a coroner inquest that she did not see the video and photos of late Sylvester Oromoni (Junior), that went viral on social media.

The news of Sylvester’s death went viral following a social media post by his cousin, Perry Oromoni, who alleged that some senior pupils beat him up in his hostel because he refused to join a cult.

But the school denied the claim, stating that the boy complained of leg pain following an injury he sustained while playing football.

A coroner inquest was set up to look into the circumstances surrounding the death.

During cross-examination by the counsel for one of the accused pupils, Kayode said she was unaware of the footage being circulated on the Internet.

The nurse, trained in Ukraine, started working at the school in November 2021, a few days before the demise of Sylvester.

The nurse, while being questioned by the Coroner, Mikhail Kadiri, said she met the deceased on Monday, November 22, 2021, when he came to her in the company of a friend to complain about thigh pain and she attended to him.

She said, “He came to me on Monday to complain about thigh pain on his right leg, that he felt the pain while trying to pick up a Bible from the floor; so I gave him a massage and applied a deep heat spray on it.

“I also gave him a painkiller, paracetamol and made him rest in the sickbay.

“Later in the evening when I checked on him, he was still limping. So, I gave him a massage again in the corridor of the hostel.”

When asked who informed the deceased’s parents about his condition, she said the school doctor, Mojisola Bisiriyu.

The nurse noted that the victim’s case was not critical as of then.

She told the coroner that when the boy was picked by his guardian, he was “assisted.”

“The deceased put his hand around his uncle’s waist and limped out,” Kayode said.

While being cross-examined by the state lawyer, Akin George, the nurse said she graduated in 2015.

“I have worked in a teaching hospital in Abuja and a private secondary school in Abuja,” she added.

Asked if she had ever treated a patient with sepsis, she replied in the affirmative.

Kayode explained that the condition could be fatal if not properly managed.