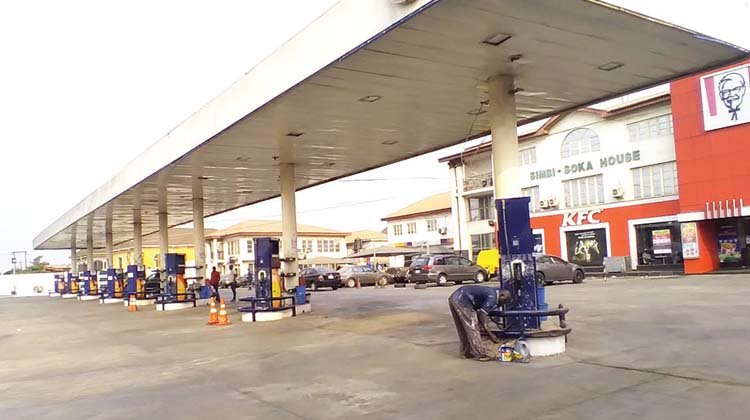 Many filling stations were shut on Monday and this led to queues by motorists in the few outlets that dispensed Premium Motor Spirit, popularly called petrol, in Abuja, neighbouring states, as well as in parts of Lagos.

It was learnt that marketers of PMS were still unsure about moves to halt petrol subsidy, considering the fact that the government had projected in 2021 that it would stop the subsidy regime in February this year.

Also, our correspondent gathered that some members of the Nigerian Association of Road Transport Owners had discontinued operations in protest against the low freight rate for petrol which they receive from government.

The National President, NARTO, Yusuf Othman, told journalists in Abuja on Monday that “our people have parked their trucks and more people are going to park (theirs).”

The National President, Independent Petroleum Marketers Association of Nigeria, Chief Ukadike Chinedu, also stated that the fear over subsidy withdrawal had been in the minds of both private depot owners and some retailers, leading to product shortage at filling stations.

“I’ve explained to you that DPOs are studying the situation around subsidy, since the government has been making various statements on this matter and this has its way of affecting the market,” he told our correspondent.

Queues for petrol in filling stations have been appearing and disappearing in Abuja and neighbouring states in the past few weeks, as marketers confirmed that aside from panic buying by motorists, there have been disruptions in PMS supply.

Ukadike had told our correspondent, “They (government) said they want to fully deregulate. That statement and similar ones which some ministers made that by 2022 we are going to start full deregulation, made some PDOs decide to hoard or withhold their products.

“They (PDOs) are doing this to be able to match up with the cost of petrol when it rises above N300/litre upon full deregulation. Now, this became a bottleneck in terms of the chain of demand and supply.

“So people who were taking petroleum products out of Lagos from the PDOs stopped a little bit to be able to look at the market value and their cost of logistics.”

Ukadike added, “That was what put a gap in the chain of distribution that led to the appearing and disappearing queues in many parts of Abuja and the north, as well as in some other locations of Nigeria.”

But the Nigerian National Petroleum Company Limited had described the queues as panic buying. Its spokesperson, Garba-Deen Mohammed, could not be reached when contacted on Monday.

A text sent to him was not replied to up till the time of filing this report around 9.16pm Nigerian time.

However, in a recent statement issued by the company on the matter, it said, “The NNPC Limited wishes to assure the public that the company has sufficient PMS stock to meet the needs of Nigerians.

“The public is therefore, advised not to engage in panic buying of petrol; and to ignore all rumours that may suggest otherwise.”

It stated that in line with the existing laws of the land, NNPC was deeply committed to ensuring energy security for the country.