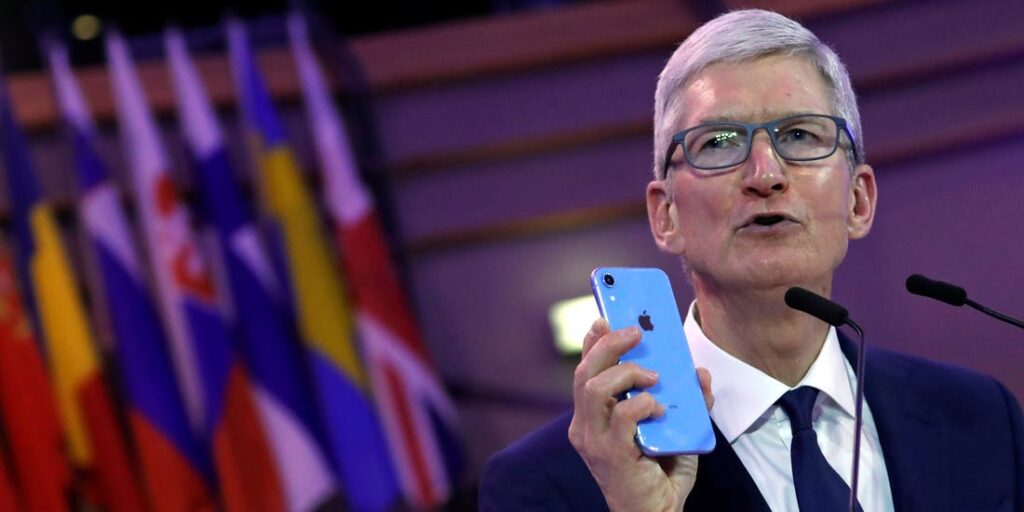 Global leading phone maker, Apple has crossed the $2 trillion mark in market valuation, making it the first company in the world to achieve this feat.

This milestone puts it in a select group and sets it on track to become the most valuable public company ever.

The iphone maker was also the first company to cross the $1 trillion market capitalization mark two years ago.

Apple stock on Wednesday surpassed $467.77 the threshold it needed to hit the $2 trillion mark as CNBC points out after closing at $462.25 on Tuesday.

The achievement is evidence that Apple’s strategy of morphing itself into more than just the iPhone company by branching out into digital entertainment and financial services is paying off even during a global pandemic.

That Apple’s wearables and services segments have so quickly become such important parts of the company’s business also underscores Apple’s biggest advantage and part of what makes it so valuable: the loyalty of its customers.

The United States S&P index which Apple belongs to has hit an all-time high this week clawing back all the losses incurred in the Covid-19 pandemic. Apple’s surge is significant particularly as it demonstrates how much demand has flowed into tech stocks in recent months from not just the US but all over the world.

The United States S&P index which Apple belongs to has hit an all-time high this week clawing back all the losses incurred in the Covid-19 pandemic. Apple’s surge is significant particularly as it demonstrates how much demand has flowed into tech stocks in recent months from not just the US but all over the world.

That loyalty, and many of the company’s business decisions over the past decade, may be how Apple found its way to such an exclusive club. Saudi Aramco, the gargantuan oil conglomerate, is the only other publicly traded company to ever reach a $2 trillion valuation, briefly grazing the milestone in December 2019 .

The stickiness of Apple’s customer base has become more important than ever in recent years as the company has increasingly leaned on services and wearables to make up for slowing iPhone sales.

Apple’s services segment, which includes newer offerings like Apple TV Plus and the Apple Card, as well as revenue from the App Store and Apple Care, is now its second-largest product segment behind the iPhone as of its fiscal third-quarter of 2020 . Apple’s services grew by 15% year-over-year and set a record for the June quarter.

Since the launch of the Apple Watch in 2015 and AirPods in 2016, Apple has also grown to lead the global market for wearable devices.

The International Data Corporation reported that the company shipped more wearable devices than rivals like Xiaomi, Samsung, Huawei, and Fitbit in the first quarter of 2020.

Apple said in April 2019 that its wearables division alone was the size of a Fortune 200 company , and in its fiscal third-quarter its wearables, home, and accessories segment generated $6.4 billion in revenue, up from $5.5 billion one year ago.

Such growth has given Wall Street confidence that there’s plenty of room for Apple to grow even if iPhone sales are stagnant, easing concerns that Apple has become too reliant on its smartphone business.

Aside from the direct impact Apple’s wearables and services segments have had on the company’s business, they also strengthen Apple’s ecosystem making it much more difficult for an iPhone user to switch to Android.

Apple’s better-than-expected performance in its fiscal third quarter of 2020 also showed Wall Street that Apple’s products are valuable enough to its customer base that people are even willing to spend money on them during a pandemic, buoyed in part by Apple’s newest low-cost $400 iPhone SE .

“It really solidified, I think, through this period, how high of a priority Apple’s products can tend to be in a consumer spending wallet,” Ong said. “And that resilience came through in their numbers in the latest quarter.”

Apple spent the last few years proving it could grow in new ways that didn’t involve breaking iPhone sales records. But even so, 2020 is shaping up to be a breakout year for the iPhone.

Apple is widely expected to release its first 5G iPhone models later this year, a launch that many analysts had expected would bring Apple’s iPhone business back to growth after several quarterly declines.

Daniel Ives, an analyst for Wedbush Securities, has called the launch a “once in a decade” opportunity for Apple. That’s because the addition of 5G as well as other improvements could give current iPhone owners more of an incentive to upgrade compared to previous years. He also predicts that 350 million iPhones are in the window of an upgrade opportunity this year.

That resurgence in iPhone upgrades combined with Apple’s booming wearables and services businesses are setting the stage for what appears to be a banner year for Apple all factors that hinge on Apple’s ability to keep its users locked into its ecosystem.

After all, an iPhone owner with AirPods and an Apple Watch would have to invest a significant amount of money to get a similar experience in the Android ecosystem.

“The more of these products that people are tacking on, it kind of communicates this idea that the iPhone ecosystem is a little more safe,” Ong said. “And that kind of resonates with investors as well.”