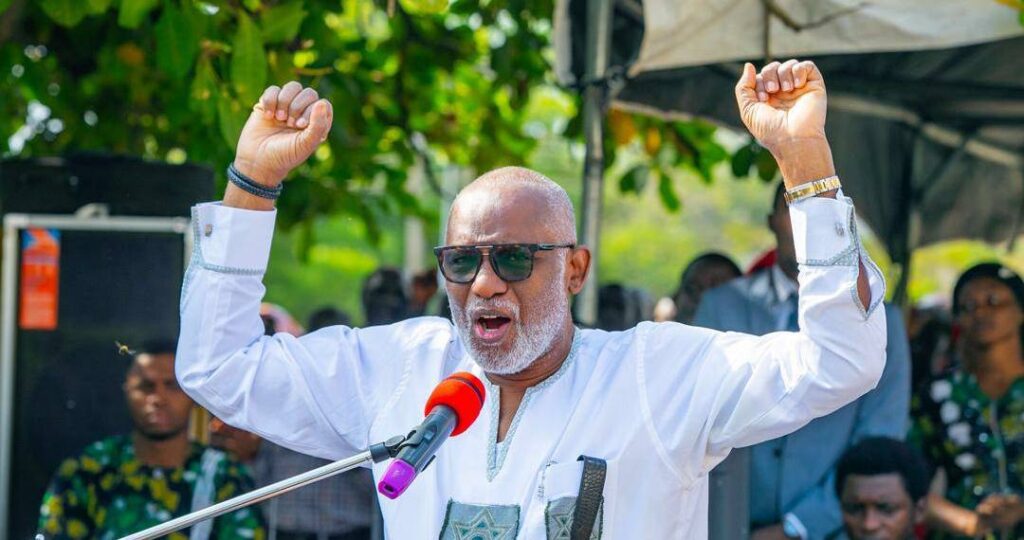 Mr Rotimi Akeredolu has been re-elected as Governor of Ondo State on the back of a campaign in which he promised to provide composed and focused leadership marked by economic growth and improved security for people in the state.

The incumbent governor, a former President of the Nigerian Bar Association, swept to victory by winning 15 of the 18 local governments.

Akeredolu defeated the Peoples Democratic Party candidate, Eyitayo Jegede, who got 195,791 votes, and the Deputy Governor, Agboola Ajayi, of the Zenith Labour Party, who came a distant third with 69, 127 votes.

“Having satisfied the requirement of the law and scored the highest number of votes, I hereby declare Oluwarotimi Odunayo Akeredolu of the APC as the winner, and he is hereby returned elected,” Chief Returning Officer for the election, Professor Olayinka said.

Professor Olayinka, who is the Vice-Chancellor of the University of Ibadan, announced the winner on Sunday at the office of the Independent National Electoral Commission (INEC), in Akure, which doubles as the final collation centre.

It is the second time the governor is defeating the PDP candidate. In 2016, Akeredolu, with Ajayi as his running mate, defeated Jegede to win his first term as governor. Ajayi fell out with Akeredolu and chose to go against his boss this time around.

Residents of the state came out on Saturday, across 3,009 polling units of 203 electoral wards/ registration areas in the 18 Local Government Areas (LGA) of the state, to choose their leader for the next four years.

The poll, the second major election to be conducted since the outbreak of the coronavirus (COVID-19) pandemic, was preceded by a dramatic campaign featuring 17 political parties and their candidates, all racing for the top political office in the south-western state.

Up to 11 contenders pulled out of the race in favour of other candidates just in the final days of the campaign with the trio of Akeredolu, Jegede and Ajayi emerging as the leading contenders.

Ajayi’s conflict with Governor Akeredolu was one of the intriguing issues that provided drama in the months preceding the election in the state.

After surviving an attempt by the State Assembly to impeach him, the deputy governor dumped the APC for the PDP. But after failing to secure the PDP’s governorship ticket, he joined the ZLP – the platform on which he contested.

Governor Akeredolu’s first tenure as governor will expire on February 23, 2021, with victory in the bag, he is on course to govern the state for another four years.

In the coming hours and days, it is expected that the opposition parties that fielded candidates in the poll will make their position on the outcome known.

Under the Nigerian Constitution, the outcome of a governorship election can be contested at the Election Petitions Tribunal and should aggrieved parties be dissatisfied, they can proceed to the Court of Appeal.

Any party who is still not satisfied with the decision of the appellate court is at liberty to approach the Supreme Court, which has the final say.