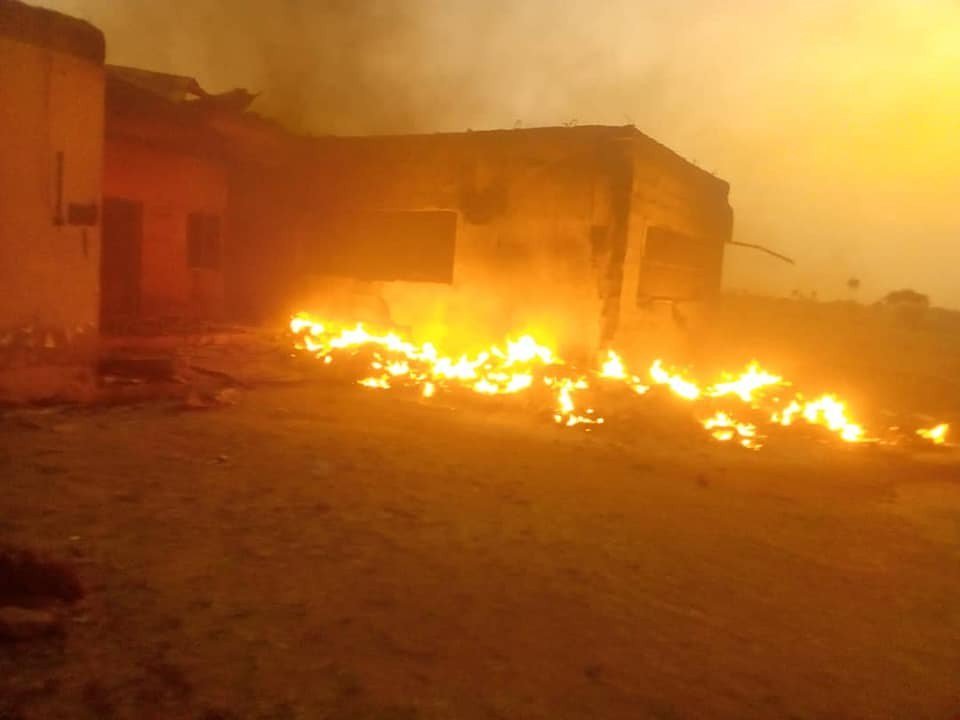 The headquarters of the Independent National Electoral Commission (INEC) in Enugu State, was on Sunday night gutted by fire.

The latest incident occured barely one week after another INEC office in Obollo-Afor, Udenu, Enugu State, was razed.

The office affected by the latest incident is located at number 1 Achi Street by Agric Bank Bus stop in Independence Layout, Enugu.

The Commissioner of Police in the state, Mohammed Aliyu, confirmed the incident in a telephone interview with the News Agency of Nigeria (NAN).

The commissioner, who did not respond to further questions, said that he was still at the scene of the incident.

NAN, however, gathered at the time of filing this report, that the Enugu State Fire Service, as well as the Federal Fire Service, were also doing everything possible to quench the fire.

The cause of the latest fire incident has not been established.

Several calls made to INEC officials especially the state’s Resident Electoral Commissioner (REC), Emeka Ononamadu, and the Public Relations Officer by NAN were not picked.

INEC recently lamented the series of attacks on its facilities in various states, mainly in the South-east and South-south regions of Nigeria.

The commission, in a statement issued last Monday, said its recently renovated office in Ohafia Local Government Area of Abia State was set ablaze by unidentified persons on Sunday night.

While no casualties were recorded, the commission said the incident led to the destruction of electoral materials and equipment which adversely means loss of millions of taxpayers’ funds.

“There are no casualties on the part of our staff on guard duty but the building was virtually destroyed. Apart from furniture items, all electoral materials and office equipment were destroyed.

“The matter has been reported to the police for investigation,” the INEC spokesperson, Festus Okoye, said in the statement.

The latest disturbing incident is the first in the state in recent times. The commission’s facilities in Arochukwu LGA and Aba South were ransacked, vandalised and completely burnt in October and December 2020 respectively.

A similar incident played out in its office in Essien Udim Local Government Area of Akwa Ibom State, giving rise to figures of coordinated attacks on the commission’s facilities in the South-east and south-south regions of the country.

“It will be recalled that only last week, the Commission reported an attack on its office in Essien Udim Local Government Area of Akwa Ibom State and expressed anxiety about the impact of such attacks on electoral activities, including the ongoing expansion of voter access to Polling Units, resumption of the Continuous Voter Registration (CVR), pending bye-elections, end-of-tenure elections and ultimately the 2023 General Election,” Mr Okoye said, alluding to damaging impacts of such attacks on Nigeria’s democratic exercise and electoral assets.

“Meanwhile, the Commission wishes to reassure Nigerians that all activities in relation to the ongoing expansion of voter access to Polling Units and preparations for the resumption of CVR as well as all scheduled elections will proceed as planned,” the commission said.

No group has claimed responsibility for the attacks but the police had blamed an outlawed secessionist group, IPOB, for attacks on public facilities and officials in the affected regions.

Following the ugly incidents, INEC said it would hold an emergency meeting with all Resident Electoral Commissioners across the states over attacks on its offices.