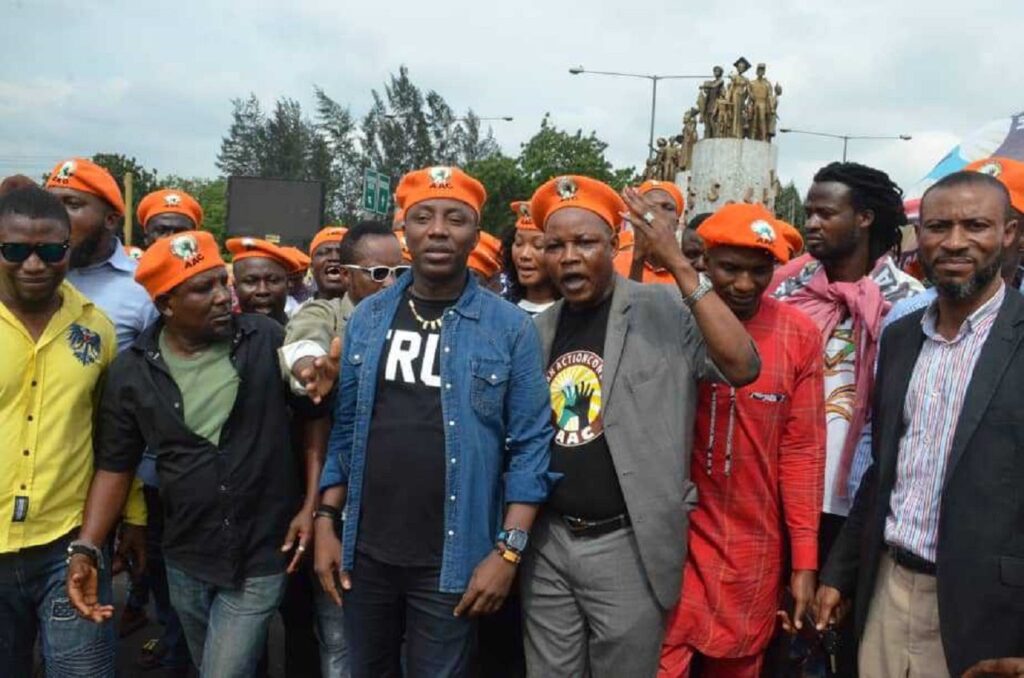 Members of the #RevolutionNow Group on Thursday hit the streets of Nigeria to demand an end to bad governance.

Some of the members of the group then approached the United States Embassy in Abuja and protested the security and socio-economic situation in the country.

They demanded the resignation of the President Muhammadu Buhari  over insecurity, hunger and corruption in the country.

The campaigners led by the convener of the movement, Omoyele Sowore, wielded a big banner with the inscription, ‘Buhari has failed,’ ‘Resign Now’, and other placards which read, ‘Failed leadership has made Nigeria the capital of the world,’ and ‘#RevolutionNow’.

The protesters, who also included #BringBackOurGirls activist, Aisha Yesufu, Ariyo Dare-Atoye, Henry Shield, Adebayo Raphael, Deji Adeyanju of Concerned Nigerians, among others, criticised what they described as oppression in the country.

Yesufu in her remarks said Nigerians must make the nation work, stating that things were becoming unbearable.

Raphael said Nigerians have passed a vote of no confidence in the country’s political leadership, adding that “under Buhari, our economy is in shambles; under him, hardship has been redefined.”

Adeyanju said Nigerians were dissatisfied with the security and economic conditions in the country, stressing that “Nigeria is not working.”

He observed that soldiers, policemen, and other security agents have taken over the Unity Fountain, Maitama, where a rally was supposed to hold.

The activist appealed to the US to place a visa ban on the Director-General of the Department of State Services for clamping down on protesters in Osogbo.

The campaigners also sang solidarity songs and berated the government for failing to address the insecurity in the country.

Also in Lagos State, protesters, numbering over 200, lamented that 60 years after the country gained independence from Britain and over 20 years of uninterrupted democratic rule, Nigeria’s socio-economic development has been mired by bad leadership.

Similar protests are also taking place in some states across the country.