I Was Accused Of Killing Nigerian Christians By Trump- Buhari 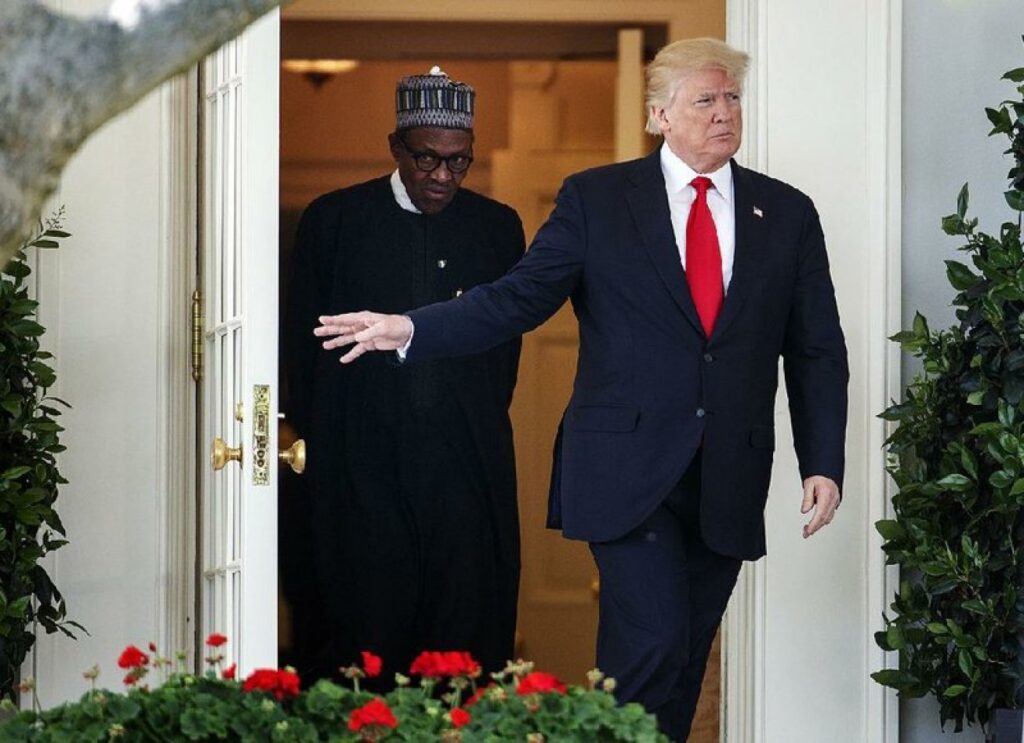 President Muhammadu Buhari on Tuesday, revealed for the first time since he met the United States President Donald Trump in Washington in April 2018, that he was unequivocally accused by Trump of killing Christians in Nigeria.

Buhari said these in his closing remarks at the two-day ministerial performance review retreat held at the Presidential Villa, Abuja.

Buhari who however said he defended himself by telling Trump that the clashes were not about ethnicity or religion, therefore charged ministers and other top government officials to go “on the offensive” in defending his regime and its achievements.

At a point, the President digressed from his prepared speech and narrated his encounter with Trump on the bloody clashes.

He said, “I believe I was about the only African among the less developed countries the President of United States invited.

“When I was in his office, only myself and himself, only God is my witness, he looked at me in the face, he asked, ‘why are you killing Christians?’

“I wonder, if you were the person, how you will react? I hope what I was feeling inside did not betray my emotion, so I told him that the problem between the cattle rearers and stagnant farmers, I know is older than me not to talk of him. I think I am a couple of years older than him.

“With climate change and population growth and the culture of the cattle rearers, if you have 50 cows and they eat grass, any root, to your water point, then they will follow it. It doesn’t matter whose farm it is.

“The First Republic set of leadership was the most responsible leadership we ever had. I asked the Minister of Agriculture to get a gazette of the early 60s which delineated the cattle route where they used meagre resources then to put earth dams, wind mills even sanitary department.

“So, any cattle rearer that allowed his cattle to go to somebody’s farm would be arrested, taken before the court. The farmer would be called to submit his bill and if he couldn’t pay, the cattle would be sold, but subsequent leaders, the VVIPs (very very important persons) encroached on the cattle routes. They took over the cattle rearing areas.

I told Trump herdsmen, farmers clashes had nothing to do with ethnicity, religion – President

“So, I tried and explained to him (Trump) that this has got nothing to do with ethnicity or religion. It is a cultural thing.”

In asking government officials to defend his regime, Buhari said they should ensure that they stop the spread of what he called “irresponsible and politically motivated statements” against his regime.

“I have charged all of you to defend the government vigorously and not allow any irresponsible and politically motivated statements to keep spreading falsehoods about this government.

“Information to the public should be better packaged, go on the offensive, we are proud of our achievements and we should blow our own trumpets,” the President said.

While attributing some of the challenges being faced by his regime to the drop in the price of crude oil, Buhari urged the elite to judge his regime fairly.

He said, “We promised three things: security, economy and fighting corruption. We repeated the same thing last year. But I want the Nigeria elite, please encourage us and judge us fairly.

“When we came, it collapsed to $37 to $38 per barrel and the militants were unleashed on the administration, the production went down.

“I want you to please reflect what was the condition of the infrastructure, roads, then in spite of the earnings. There was no power and up till now, there is no power. Where did the money go?

“So, please encourage your friends the elite to reflect on what this administration has done. What the APC (All Progressives Congress) has done and what we have achieved. Well, I am doing my best, God has given me two chances.”

Buhari reiterated his position that ministers should always channel their meeting requests to him through his Chief of Staff, Prof Ibrahim Gambari.

He said, “Let me also reiterate that all submissions for my attention or meeting requests should be channelled through the Chief of Staff, while all Federal Executive Council matters should be coordinated through the Secretary to the Government of the Federation.

“I have directed the Minister of Finance, Budget and National Planning, the Governor of the Central Bank of Nigeria and all other responsible agencies to ensure speedy and timely release of funds to MDAs for implementation of the N2.3trn Economic Sustainability Plan and the capital projects in the 2020 budget.

“I also enjoin ministers to ensure that funds released are utilised efficiently and transparently in implementing the programmes and projects under the line priorities areas of government.

“I hereby charge the ministers, permanent secretaries and all heads of parastatals to be continuously conscious of their commitment and responsibilities.

“On behalf of the people of Nigeria, I demand uttermost levels of performance, deliverables and results. I look forward to a result-oriented year with tremendous benefits that will continue to change lives of our people positively.”

Buhari decried what he called “insufficient collaboration, coordination and synergy” among implementing ministries, departments and agencies, saying that era should end.

In that regard, he said he had directed that essential coordination delivery unit in the Office of the Secretary to the Government of the Federation be revived to ensure that government focuses on results.

Killings in Nigeria not cultural, your conversation with Trump weak, CAN tells Buhari

Meanwhile, the Christian Association of Nigeria, in its reaction, described Buhari’s revelation of his conversation with Trump as weak.

CAN’s Vice President and Chairman of the association in Kaduna State, John Hayab, in an interview with PUNCH, said, “Buhari and his government will never stop from amusing us with their tales by moonlight because what is happening in Zamfara, Sokoto, Katsina, Birnin Gwari, Southern Kaduna, Taraba, Plateau and others cannot be described as a cultural thing.

“President Buhari’s weak story about his conversation with President Donald Trump further confirms why his government does not care about the killings in our country by calling them cultural things.

“Just this (Tuesday) evening, I received a report from the Kaduna Baptist Conference President about the number of their members that have been killed by bandits in Kaduna State from January 2020 to date to be 105 and our President will call it a cultural thing? All we can say is may God save our Nigeria.”