FG To Decide On Interstate Travel Ban, Others Next Week 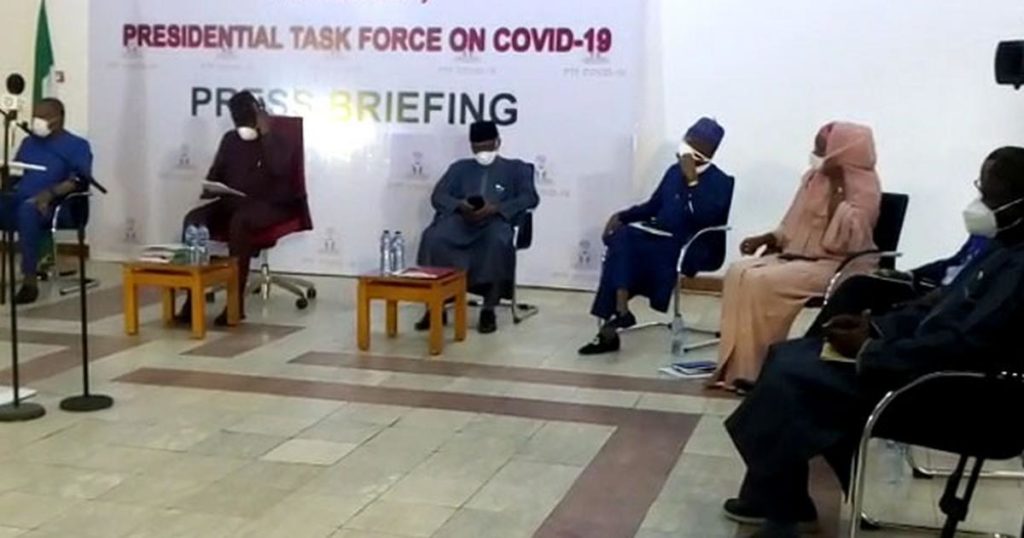 The Presidential Task Force on COVID-19 on Monday said it had started reviewing the guidelines for lifting of the ban on interstate travels.

Speaking at the daily press briefing of the PTF in Abuja, the National Coordinator of the task force, Dr Sani Aliyu, said the roads would be opened when the bus termini in the country all had COVID-19 preventive measures in place.

Aliyu stated this as the PTF Chairman, Boss Mustapha, disclosed that the Federal Government would next week decide on its lockdown policies, including    the ban on interstate movements.

The PTF coordinator said the guidelines submitted by the Minister of State for Transportation, Gbemisola Saraki, was being reviewed and the roads would be opened as soon as it is safe to do so.

He said, “At the moment, we still have restrictions on interstate travel. But we have been linking up with the Federal Ministry of Transportation through the Minister of State for Transportation.

“They have given us guidelines that they have developed : very detailed guidelines, and we have looked at them, summarised them and discussed at PTF last week.

“We have asked the Minister of State for Transportation to please engage with the road transport workers to make sure that the usual garages and parks that we have are ready in terms of guidelines that we have in place such as physical distancing, reducing the number of passengers per vehicle and provision of hand washing facilities etc.

“And I believe they are already working on this and hopefully, we should be able to open as soon as it is safe to do so.”

Aliyu expressed worry over the lack of compliance with safety protocols and urged states to increase the rate of their COVID-19 testing also asked them to make laws to make the wearing of masks in public space mandatory.

Meanwhile, Mustapha, said the Federal Government would at the end of the month take a crucial decision on the lockdown declared to curtail the spread of COVID-19.

Mustapha said, “At the beginning of the month of June, the PTF announced a one-month period for the implementation of the second phase of eased lock down.

“We have continued to monitor developments nationwide in order to take informed decisions at the end of the month. We have exactly eight days to that point of decision.”

While answering a question on whether the government might consider a total lockdown again, Mustapha assured Nigerians that the decision that would be taken by month end would not any way amount to a change in strategy.

He said if there would be a change in strategy, it would be expected to come from the side of Nigerians.

No state is COVID-19-free, NCDC insists

The Nigeria Centre for Disease Control has insisted that no state is COVID-19-free in the country, noting that this was the reason tests were being carried out.

The centre disclosed that seven states presently have no testing facilities, adding that by next week, the nation would be covered in terms of testing.

The NCDC Director-General, Dr Chikwe Ihekweazu, noted that efforts were ongoing by the state governments to address the challenge.

Reacting to claims that some states are free of the virus, the DG said, “No single state is COVID-19-free. No country in the world, even New Zealand that is an island state is still having new cases after a period of not having new cases.”

“So, right now, no state is COVID-19-free, that is why we have to keep doing this work that we are doing; testing people, finding out if they have it even if you don’t have it, you can spread it. If you are asymptomatic, you live with others that are more vulnerable, they can get it.

“At the moment, it is very difficult to reduce the testing period to more than seven hours for conventional, and more than three hours to Gene Xpert. The technology just doesn’t allow for that yet and that’s why we are looking for rapid diagnostic test kits that worked,” Ihekweazu stated.

The Minister of Health, Osagie Ehanire, noted that confirmed cases in Nigeria had surpassed the 20,000 mark, reaching 20,244 between Sunday and Monday.

While talking on the increasing fatality rate, the minister said, “The experience we are getting suggests that some of the fatalities recorded in our country may possibly have been saved if they had arrived designated treatment centres early enough.

“It is also emerging that the clinical condition of COVID-19 patients, especially the elderly and those with underlying illnesses, can change from mild to critical within such a short time that patients hardly have time to seek hospital care.

“I again advise all hospitals to have the right index of suspicion and recognise and promptly refer suspected cases to designated hospitals.

The Minister of state for Education, Chukwuemeka Nwajiuba,  while answering questions from journalists during the press conference, faulted the reopening of schools by governor Seyi Makinde of Oyo State.

According to him, the Ministry of Eduction did not give out any guideline to Oyo State to reopen schools, emphasising that like all other sub-nationals, governors were under the constitution of the Federal Government of Nigeria.

Makinde, who said that a team of experts were reviewing the pattern and progress made in the fight against the virus, said the opening of schools in the state was scheduled to be gradual