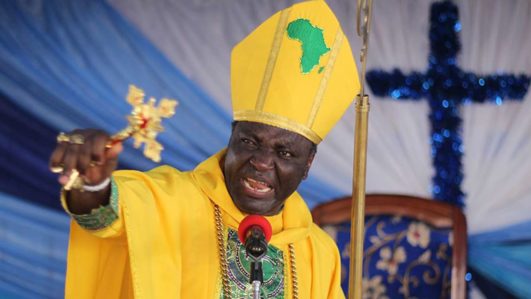 Archbishop Benjamin mustapha, A. K. A. Jehovah Sharp Sharp has identified one of the alleged hired ‘bishops’ at the unveiling of Tinubu’s running mate, Shetimma on the platform of the APC for 2023 presidential election.

This claim by Archbishop Benjamin Mustapha further lends credence to the legitimacy of this controversial clerics, who have been subject of debate, recently among Nigerians.

Speaking with newsmen over the weekend, Archbishop Benjamin Mustapha identified one of the men dressed in bishopric attire, as a one-time minister employee under his ministry, Resurrection Praise Ministries.

The authority of Christian Association of Nigeria, CAN, had earlier disassociated herself from such scornful show of shame, paraded as Bishops.

Speaking to newsmen at the Headquarters of his ministry today in Lagos, the outspoken clergy who held a burial ceremony for Deborah Samuel who was killed and burnt to death by some religious bigots said “Tinubu has desecrated the altar of Jehovah by bringing fake people and miscreants to pose as Bishops. The office of a Bishop is held in high veneration in the Christendom, but these men have defiled it by bringing charlatans to act as Bishops, Tinubu will never become the president of this nation because he does not have respect and fear for the Almighty God”.