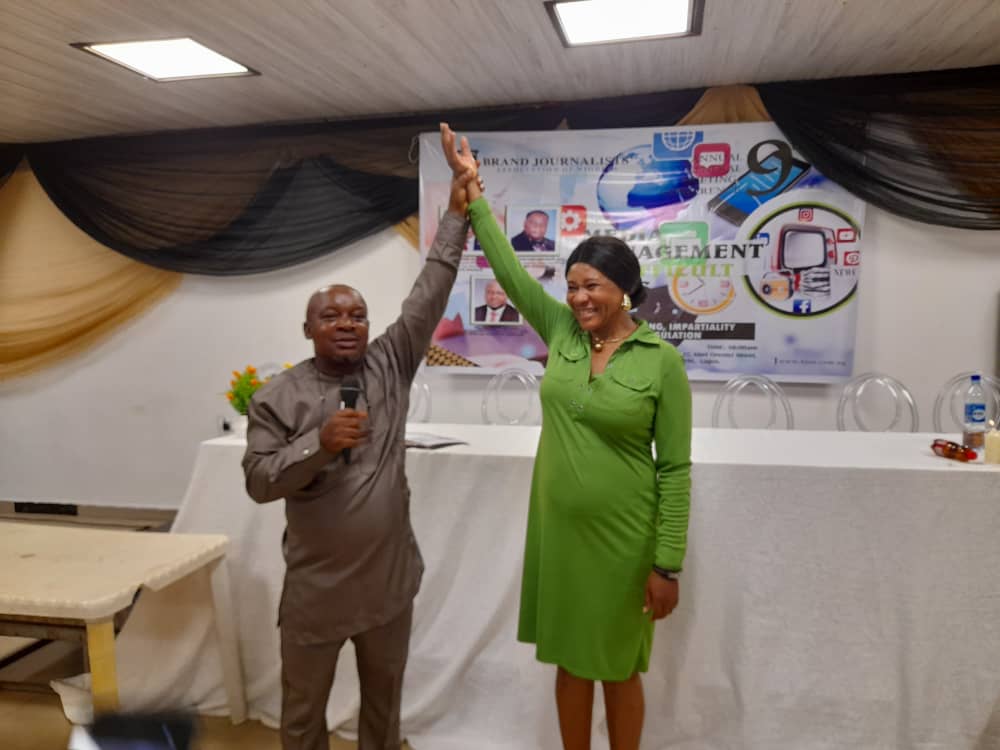 The Brand Journalists Association of Nigeria (BJAN), a body of writers that cover the Integrated Marketing Communications (IMC) space has elected Clara Chinwe Okoro as the new Chairman to pilot its affairs for the next three years.

Clara, who is a veteran broadcaster and experienced brand writer, is the Executive Producer, Brandworld Media.

She was the vice Chairman of BJAN under Mr. Goddie Ofose’s administration, between 2016 and 2019, where her experience helped in spurring the association to greater heights.

In 2018, her desire to assume the leadership of BJAN as the Chairman suffered a setback via a keenly contested election that brought in the late Princewill Ekwujuru.

Other members elected into other various executive positions included Ayobami Lukman Ishau of Marketing Space, who emerged as the Vice Chairman. He was the immediate past General Secretary.

The outgoing Chairman, Mr Afolabi Idowu lauded the BJAN members for their unflinching support given to him especially since he took over the reigns of power about two months ago following the death of the former Chairman, Princewill Ekwujuru.

He also thanked all the stakeholders who stood with the association when Ekwujuru was involved in the auto accident as well as when he eventually died.

Idowu stated that the incoming chairman had been fully involved in the affairs of the association and would be supported to deliver on her programmes.

He also thanked the electoral committee members for organising a free and fair election.

In her acceptance speech, the Chairman-elect, Okoro thanked members of the association for unanimously giving her the mandate to guide BJAN’s course and chart ground breaking deliverables for members.

She promised to run an inclusive government as she noted that none would be left behind.

“Three years is not a long time, so we will hit the ground running and with all your support we will triumph over every single obstacles and deliver the BJAN of our dreams,” she submitted.

Noting that the future looks exceedingly bright for the association, Okoro said her administration would do everything within its capacity to make BJAN a globally recognised IMC organisation.

The Brandworld Media executive producer, charging members to form a formidable cohesive front to achieve the results in no distant future, said; “This can only be achieved with the quality of the output of BJANs content in the right spaces and the repository of our collective talents through our writeups and electronic contents and how it is shaping thoughts and narratives in the industry both in Nigeria.

“This is no time to play small anymore you have worked hard to build successes for companies and by extension lives of individuals in those organisations. You and your families can and will benefit from that success as you deserve it.

“We will create a strategy document which would be a road map guiding us in the short medium and long term to achieve these goals.”

While assuring that all her manifesto promises would be followed through, the new Chairman extended her appreciation to Raheem Akingbolu, Peter Jones Ailuorio, Dayo Odulaja, Goddie Ofose, Afolabi Idowu, Lukman Ishau, Adejuwon Osunnuyi and Patrick Onuoha for the roles they played behind the scene to ensure she competes and eventually emerged winner in the election.