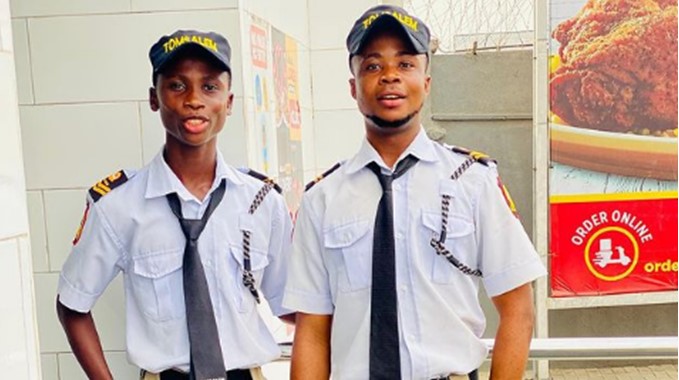 Matthew Precious Kelechi and Amakor Johnson, two friends and former security guards who became famous after their dance video went viral have talked about the challenges they faced growing up.

In an interview with Premium Times, Happie boys revealed that when they graduated from secondary school, they could not further their education due to paucity of funds so they opted to seek employment which was when they landed the job as security officers.

The young men, who have gotten scholarship to study in Cyprus, also said that they were overwhelmed with joy when Apostle Chibuzor Chinyere of Omega Power Ministries offered to sponsor their education.

In their words; ”Surprisingly, after completing our secondary school education, we did not have the means to further our education, so we went job hunting and applied at Chicken Republic, Aba. Two weeks later, they called, asking us to resume work as their new security guards.

We spent over three months at Chicken Republic as we began working there in December 2021.”

”Now, given the opportunity to travel to a country like Cyprus, we hope to attain a tertiary degree in addition to our secondary school degree. It sounded unbelievable. When Apostle Chibuzor Chinyere announced, many people called us, requesting we go to his house.

So, meeting him and being told we would study overseas at Final International school in Cyprus was a mind-blowing moment. We also got a job offer from the special assistant on special duties to the Governor of Delta State, Ossai Ovie Success.”