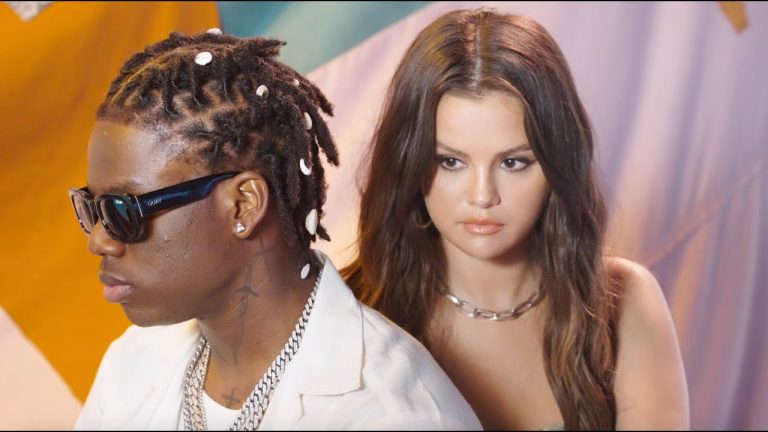 Rema and Selena Gomez’s “Calm Down” claims the No. 1 spot on the Billboard Global Excl. U.S. chart, jumping from No. 8 and marking each act’s first leader on the list.

All songs in the top 10 of the latest Global Excl. U.S. chart, which reflects the Dec. 30-Jan. 5 tracking week, vault in rank as holiday hits melt away. (The only seasonal songs on the newest survey are Mariah Carey’s “All I Want for Christmas Is You,” which tumbles from No. 1, where it has spent eight total weeks over the last three holiday seasons, to No. 169, and Wham!’s “Last Christmas,” down from its No. 2 high to No. 190.)

The Billboard Global 200 and Billboard Global Excl. U.S. charts, which began in September 2020, rank songs based on streaming and sales activity culled from more than 200 territories around the world, as compiled by Luminate. The Global 200 is inclusive of worldwide data and the Global Excl. U.S. chart comprises data from territories excluding the U.S.

Chart ranks are based on a weighted formula incorporating official-only streams on both subscription and ad-supported tiers of audio and video music services, as well as download sales, the latter of which reflect purchases from full-service digital music retailers from around the world, with sales from direct-to-consumer (D2C) sites excluded from the charts’ calculations.

Rema and Selena Gomez’s “Calm Down” jumps from No. 8, besting its prior No. 4 high set in September, to No. 1 on the Billboard Global Excl. U.S. chart, with 53.3 million streams (essentially even week-over-week) and 4,000 downloads sold (up 18%) in territories outside the U.S. Dec. 30-Jan. 5. Nigeria native Rema (real name: Divine Ikubor) released the original version of the song last February as the second single from his debut solo LP, Rave & Roses. Its remix with Gomez arrived Aug. 26, and that version’s official video premiered Sept. 7.

Rema tops Global Excl. U.S. in his first appearance on the chart – and becomes the first act from Africa to reign. Gomez also lands her first leader, among two top 10s since the chart began, after “Ice Cream,” with BLACKPINK, ranked at its No. 6 high on the inaugural list in 2020.