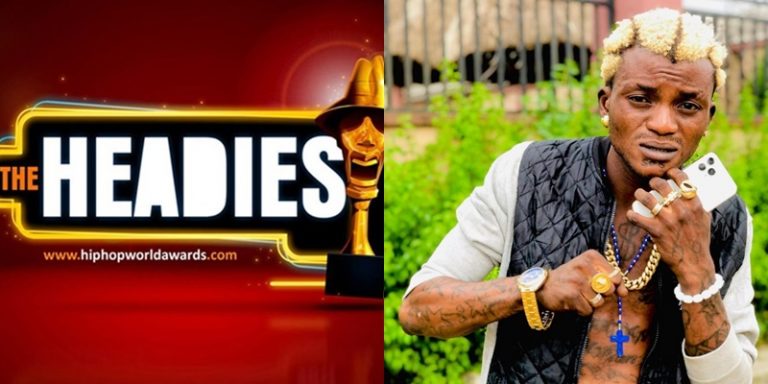 Nigerian musician, Habeeb Okikiola, popularly known as ‘Portable’ has been disqualified from the list of nominees at the forthcoming 15th Headies Awards.

The ‘Zazu’ crooner was disqualified for threatening to kill his co-nominees.

“The decision to disqualify Mr Okikiola is accentuated by series of misdemeanors by Mr Okikiola via his social media platforms,” organisers of the Headies, Smooth Promotions Limited, said in a statement on Tuesday.

In May, Portable had threatened to cause harm to other nominees in the categories he was nominated for if he did not emerge the winner.

A video surfaced online in June showing Portable assaulting and inflicting body harm on another person.

Portable, earlier this month, also published a video on social media stating that he is the founder of the notorious group, ‘One Million Boys’.

“In his words, he said; ‘Have you heard of Ajah boys, One Million Boys? I established them.’ Furthermore, on the 17th of June 2022, Mr. Habeeb Okikiola made a recording of himself where he ordered his group of friends to assault and inflict bodily harm on his accused friend, DJ Chicken. In his words, he said;’Ena eleyi paa jo (beat him mercilessly,’ the statement read.

“We shall not condone reckless and uncouth statements from artists and hereby disassociate ourselves from any individual linked to such assembly or activities linked to him as described,” the Headies said.

“The music industry demands all-round excellence. it is extremely important for young artists being potential role models to exude professional responsibility, proper decorum and have respect for others.”

Portable had been nominated for two categories: Best Street Artist and Rookie of the Year.