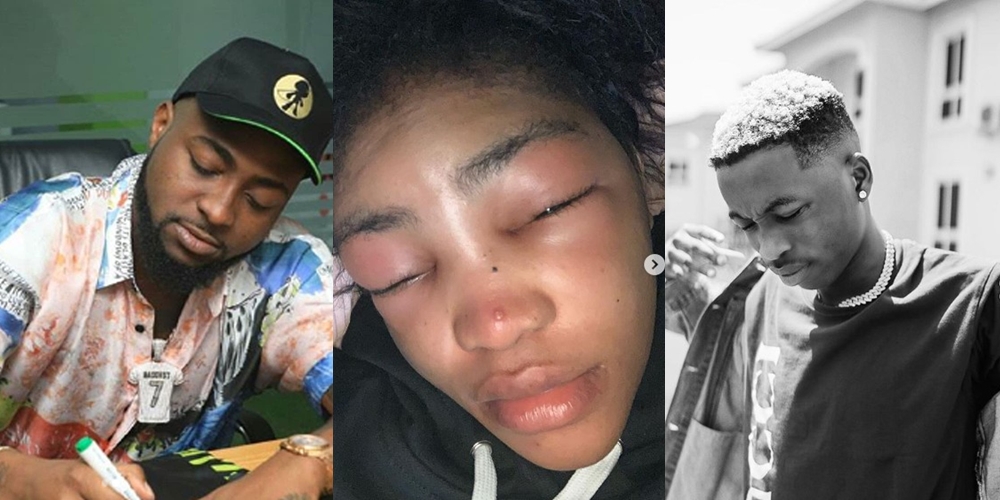 The decision was announced in a statement by the record label posted on Davido’s Instagram page on Tuesday.

In the statement, the label wrote that they would not condone or take lightly issues of domestic violence which Lil Frosh was found guilty of, from their “internal investigations”.

“There is no excuse for the actions of Lil Frosh and we understand that there is nothing that can be said or done to take away the insensitivity shown,” the statement read in part.

“Upon internal investigations carried out by the label, we are left with no option than to terminate the recording contract that exists between the label and Lil Frosh, effective immediately. We hereby immediately severe all affiliations with Mr Sanni Goriola Wasiu aka Lil Frosh.”

Lil Frosh, who joined the DMW record label in October 2019 as a new artiste, was called out on Monday for allegedly brutalizing his girlfriend, Camille.

Camille’s brother and manager, Michael took to his Instagram page to share pictures of his sister’s battered face, claiming that Lil Frosh had been assaulting her for a long time but he could not cover for him anymore.

He wrote, “My client and sister has suffered enough!!! We have kept quiet enough @lhilfrosh. You have done enough damage for almost a year now you have been in a relationship with my sister and client and you have brought her nothing but horror, pain, and disaster.”

He said further that Ms Camille, who works as a commercial face model has lost several job offers because Lil Frosh constantly left her face battered up.

“I remember the first time I found out about you beating her on Monday 22nd of June @official_lyta team reached out to me wanting to use her for his musical video shoot but she kept on saying you didn’t like it not knowing you had beaten her to pulp and she couldn’t face the world with so much Bruise. Their team begged to double the money but she couldn’t take the job because of you.

“You created so much fear in her till she turned down the job, but you still didn’t stop on a particular day you called me and you were begging me for almost 3 hours on the phone telling me to talk to her just to get back to you. Which I begged her and you promised never to lay your horrible hands on her,” he said.

Ms Camille also went on her Instagram page to tell her story. She wrote that she is aware she should have spoken out earlier but she hoped he would change.

“@lhilfrosh and I have been dating for almost 10 months now and he has been abusing me physically, mentally, and emotionally. At first, I sincerely hoped he was going to change but he didn’t, it started with stripping me off my friends telling me who to talk and who not to talk to. It grew to him beating each time we had an argument, he’ll beat me, smash my phone, destroy my ring light, pour me water even film me naked and threaten to post, he has done right in front of @okikidft and it continued.

“This happened last 15th of September, which led to the internal bleeding in my head, confirmed by the doctors. My manager spoke on my behalf with my permission and he is not to be blamed for anything he didn’t beg me to go and meet him no one did, not even my family, everyone advised me but I still did what I wanted hoping for change,” she said.

She also went on to write about what had really caused the recent abuse.