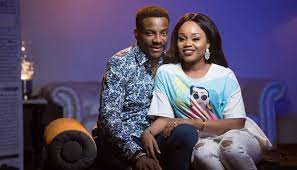 Cynthia, the wife of TV host, Ebuka Obi-Uchendu, one of the hosts of the ongoing TV show titled Big Brother Titans, said her husband is sick.

She made the revelation on Sunday, after her husband hosted the BBTitans premiere on Sunday night despite being extremely sick.

“Who would have thought Ebuka is extremely sick right now… professional to the core,” Cynthia wrote on Twitter.

Meanwhile, some of Ebuka’s fans have started to wish the talented TV host qucik recovery.

‘Big Brother Titans,’ is the biggest version of the Big Brother franchise that Africa has ever seen.

The premiere of the show was hosted by Ebuka and South Africa’s Lawrence Maleka on Sunday night.

Both media personalities shared the stage and handled a blend of housemates from different parts of Nigeria and South Africa.