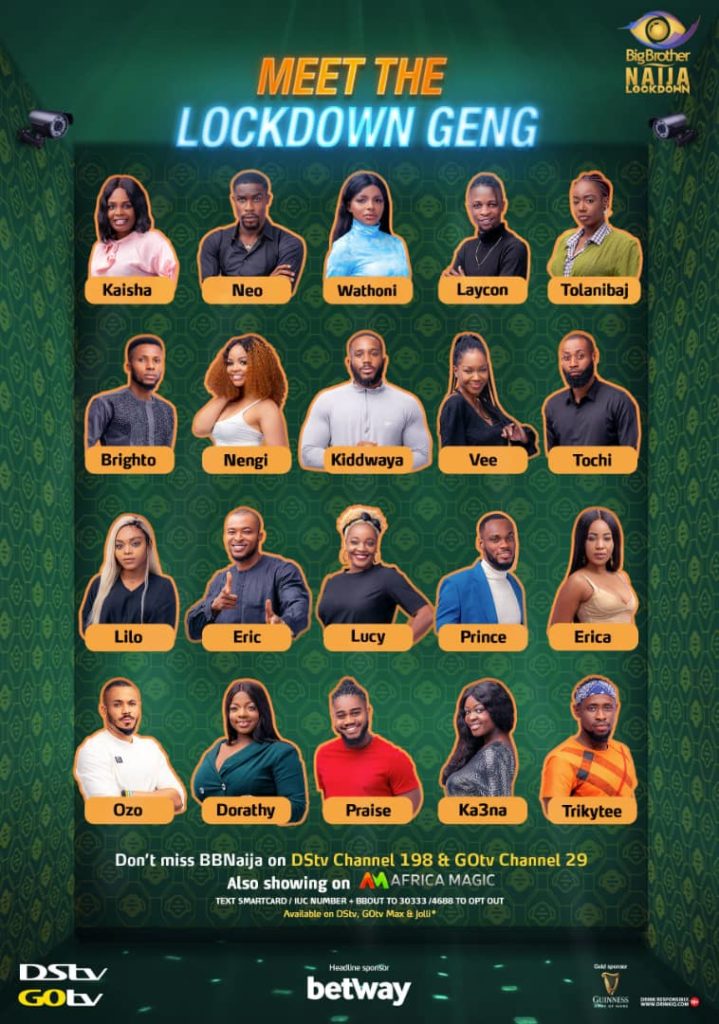 The Big Brother Naija season 5 edition officially started on Sunday, July 19 and the theme of the new season is “Lockdown”, which is in tune with the new situation of the world due to COVID-19.

20 housemates will be competing for the N85million grandprize for the next 10 weeks and it looks like we are in for a lot of fun with these lots.

After over two weeks of compulsory isolation and Covid-19 testing, the housemates were ushered into the show for a whole new season of premium entertainment.

The first five housemates had bodies fitting demigods with conspiracies on top of their to-do lists. First was Ozo, then came Vee with the angelic voice.

Then came in Prince,Lilo, TrikyTee, Lucy, Kiddwaya and Dorathy who seems to be a quick favorite. Others are Praise, Wathoni, Tochi, Ka3na, the 6ft 5 Eric, Erica, Bright O, Kaisha, Neo, Tolanibaj, Laycon and the final housemate, Nengi.

Ozo is a 27-year-old entrepreneur from Imo state and he served the first dose of hotness with his biceps, height and light skin tone.

Vee was born and raised in London. She is a 23-year-old musician now based in Lagos.

Prince claims he is royalty from Abia State. The 24-year-old is into interior decoration, fashion designing and modelling.

23-year-old Lilo is a dietitian based in Lagos. She claims she doesn’t like people being in her business. She is goal driven and she likes to be in charge.

35-year-old TrickyTee is a creative artiste from Bayelsa state.

30-year-old Lucy is an entrepreneur.

Kiddwaya is 27 years old. He is self-employed from Benue state.

24-year-old Dorathy started trending on twitter immediately she was introduced into the house.

She is a 29-year-old single mom. She is a fashion entrepreneur and also owns a parenting blog. She speaks and writes in Swahili perfectly.

He is 28, a rapper and a real estate agent from Imo state. He is a lover of entertainment and promises to bring a lot of fun and drama to the house.

She is a single mom of a beautiful daughter and she is not in the house to look for love but to promote her brand. She dreams to be famous and own the biggest fashion brand in the world. She loves to have a lot of money and have fun.

The final year student of the University of Lagos is a fitness instructor who lost his virginity at 20. He says he will be showing a lot of nudity in the house. he is also a fun and fitness enthusiast.

A graduate of MET film school, London, Erica is an actress and a commercial model. She dislikes attention seekers and people who don’t take care of their hygiene. She also says she is bringing a lot of good vibes to the house.

29-year-old Brighto is a sailor from Edo state. He says he has been to most states in Nigeria and he speaks Igbo, Hausa, Yoruba, and Edo languages fluently. He says he is a lover of entertainment and a people’s person.

Kaisha is 25 years old and she hails from Sokoto state. She owns a skincare business and describes herself a hardworking lady who gets along with people. She loves to sing and dance.

The 26-year-old Deltan says he is bringing a lot of good vibes, cruise and entertainment to the house. He is a ride hailing app driver and he describes himself as smart and fun. He does not tolerate bullying and inequality.

Beautiful Tolanibaj is a media personality and she says she likes Naira Marley. Guys, we have a Marlian in the house! Another Lagos babe, the 27-year-old says she is the life of the party and she loves to cook.

The 26-year-old graduate of University of Lagos is a rapper and singer. He is currently signed on to Fierce Nation record label. He believes he is a lot of fun and viewers will enjoy his stay in the house.

The 22-year-old graduate of the University of Port Harcourt is a model turned entrepreneur. Even though her beauty already got viewers talking, she wants people to look past her beauty.