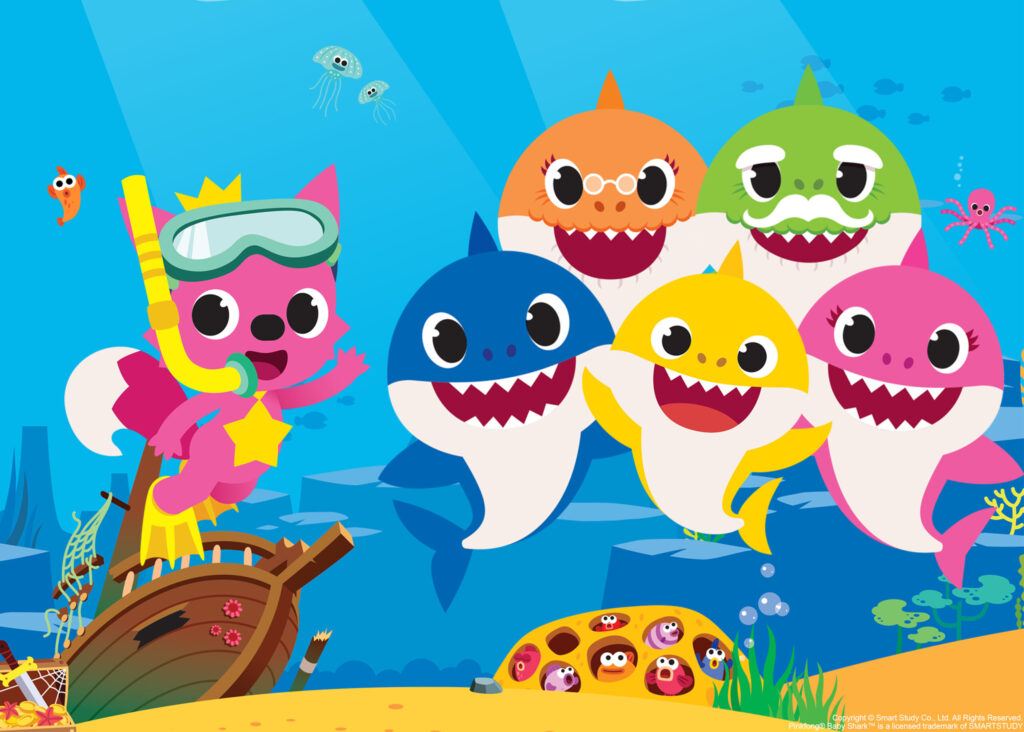 The song has now been viewed more than the previous record holder Despacito, the Latin pop smash by singer Luis Fonsi.

Played back-to-back, that would mean Baby Shark has been streamed continuously for 30,187 years

Pinkfong stands to have made about $5.2m from YouTube streams alone.

It took four years for Baby Shark to ascend to the top of YouTube’s most-played chart, but the song is actually much older than that.

It is thought to have originated in US summer camps in the 1970s. One theory says it was invented in 1975, as Steven Spielberg’s Jaws became an box office smash around the world.

There are a huge number of variations on the basic premise, including one version where a surfer loses an arm to the shark, and another where the protagonist dies.

There are also international versions – including the French Bebe Requin and the German Kleiner Hai (Little Shark), which became a minor hit in Europe in 2007.

But none of them could match the phenomenal success of Pinkfong’s interpretation, which was sung by 10-year-old Korean-American singer Hope Segoine and uploaded to YouTube in 2015.

That clip that inspired the hashtag #BabySharkChallenge – with everyone from Indonesian farmworkers to pop stars Cardi B and Josh Groban joining the fun.

The song is catnip for children, whose appetite for repetition has undoubtedly helped it climb the ranks of YouTube’s most-watched videos.

“Nursery rhymes have always been sort of slow, very cute, but something that would help your children fall asleep – as opposed to Baby Shark,” Pinkfong’s marketing director Jamie Oh told the BBC in 2018.

“Pinkfong’s Baby Shark is very trendy and it has a very bright beat with fun dance moves. The animation is very vivid. We call it K-Pop for the next generation.”

The company is turning the song into a movie and a musical, and aspires to make Baby Shark “another classic for kids music, like Twinkle Twinkle Little Star”, Oh added.

However, Pinkfong’s parent company SmartStudy was sued in 2019 by children’s songwriter Jonathan Wright, who recorded a similar arrangement of the song in 2011 and argues that he owns the copyright to that interpretation.

SmartStudy responded that their verison was “based on a traditional sing-along chant which has passed to public domain”. The case is still under consideration by the Korea Copyright Commission.

Last month, the song was at the centre of another controversy, when three prison workers in Oklahoma were accused of using it to punish inmates.

According to court documents, five prisoners were handcuffed against a wall and forced to stand for two hours while listening to Baby Shark on repeat.

Exposure to the song put “undue emotional stress on the inmates who were most likely already suffering”, said district attorney David Prater.

But the song has also been put to positive use.

When Eliane Jabbour unexpectedly found herself in the middle of an anti-government demonstration in Lebanon last October, she was concerned the commotion would scare her 15-month-old son, who had just woken from a nap in the passenger seat of her car.

Instead, the protestors circled her car and sang Baby Shark to help calm the toddler down.

A video of the episode in Beirut – with Robin staring wide-eyed at the singing and dancing – itself went viral, and became a symbol of hope amid the protests.