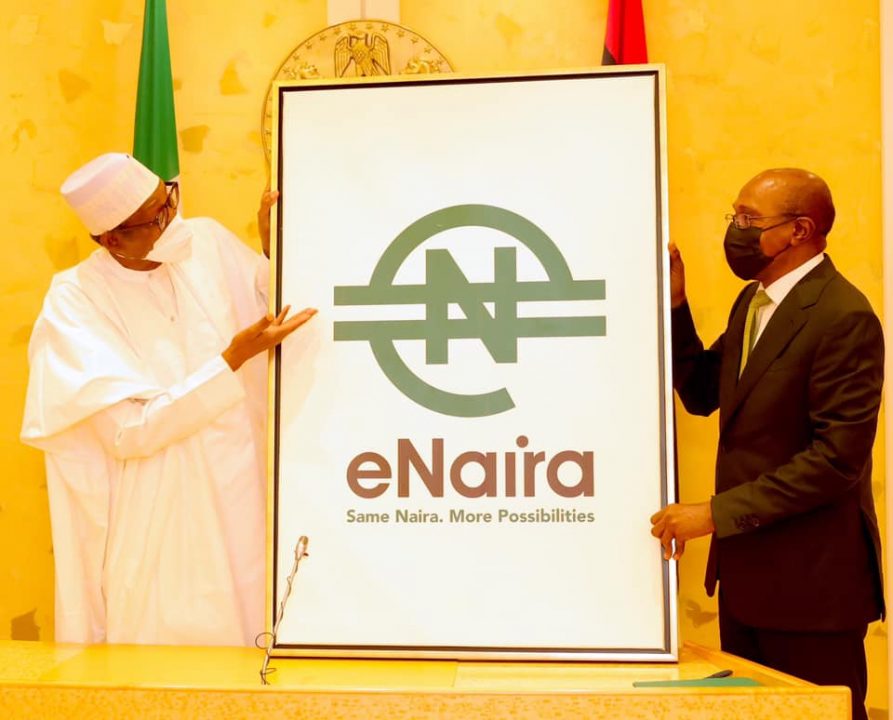 President Muhammadu Buhari, on Monday, unveiled the Central Bank of Nigeria’s digital currency, also known eNaira, saying that the currency and its underlying blockchain technology can increase the nation’s Gross Domestic Product, GDP, by $29 billion over the next 10 years.

The keynote event was attended by top government functionaries at the State House, Abuja.

According to him, the digital currency will help move many more people and businesses from the informal into the formal sector, thereby increasing the country’s tax base.

Buhari said, “In recent times, the use of physical cash in conducting business and making payments has been on the decline. This trend has been exacerbated by the onset of the COVID-19 pandemic and the resurgence of a new digital economy.

“Alongside these developments, businesses, households, and other economic agents have sought for new means of making payments in the new circumstances.”

Buhari lauded the CBN for coming up with the eNaira.

On his part, the Governor, CBN, Godwin Emefiele, said since the eNaira platform went live, there had been overwhelming interest and encouraging response from Nigerians and other parties across the world with over 2.5 million daily visits to the website.

He said, “Thirty-three banks are fully integrated and live on the platform, N500m has been successfully minted by the bank, N200m has been issued to financial institutions, over 2,000 customers have been onboarded and over 120 merchants have successfully registered on the eNaira platform.”

The CBN governor also used the occasion to commend the President for “making history, yet again,” with the launch of the eNaira – the first in Africa and one of the earliest around the world.

Emefiele announced a new financial instrument titled, “The 100 for 100 PPP – Policy on Production and Productivity”, which he said would be domiciled in the Development Finance Department of the CBN under his direct supervision.

He explained that under this policy, the CBN would advertise, screen, scrutinise and financially support 100 targeted private sector companies in 100 days, beginning from November 1, 2021.

The event was attended by Vice-President Yemi Osinbajo; the Secretary to the Government of the Federation, Boss Mustapha; the Chief of Staff to the President, Prof. Ibrahim Gambari; members of the Federal Executive Council; top officials of the CBN and heads of relevant government agencies.

Meanwhile, the CBN disclosed that all transactions conducted on the newly-launched digital currency platform would be free for 90 days.

The regulator, however, stated that it would revert to its guide on applicable charges by banks and other financial and non-financial institutions at the end of the stated period.

The apex bank also said that Ministries, Departments and Agencies could make payments and collect revenues using the eNaira wallet.

The CBN disclosed this in the framework titled, ‘eNaira Circular and Guidelines’, which was later released on Monday.

The central bank  guide read in part, “The charges for transactions that originate from the eNaira platform shall be free for the first 90 days commencing from October 25, 2021 and then revert to applicable charges as outlined in the Guide to Charges by Banks, Other Financial and Non-bank Financial Institutions. MDAs may collect revenues or make payments in eNaira.”

Meanwhile, economic and financial experts have said that the eNaira will not change or affect the value of the naira in the foreign exchange market.

They also expressed concern over the risk of cyber attacks on the eNaira accounts of Nigerians.

They spoke against the backdrop of the unveiling of the eNaira by the CBN.

The immediate past Director-General of the Lagos Chamber of Commerce and Industry, Dr. Muda Yusuf, said there was no relationship between foreign exchange market and the eNaira.

He said, “There is no connection between the eNaira and the exchange rate. No relationship at all.  Exchange rate is determined by the demand and supply fundamentals in the foreign exchange market.

“These are driven largely by imports, exports and the flow of capital across borders. The naira, whether digital or physical, is just a means of exchange and to some extent, a store of value.”

He, however, noted that the eNaira was consistent with current digitalisation trend across all sectors globally.

Yusuf, who is the chief executive officer, Centre for the Promotion of Private Enterprises, explained that digital applications typically came with efficiency, cost effectiveness, smartness in usage and convenience.

“But it is still not clear what the value proposition of the eNaira is, beyond the psychological satisfaction of joining the league of countries with digital currencies,” Yusuf stated.

The CPPE boss noted that transactions on these platforms were already in trillions of naira, and still counting, adding that it remained to be seen what additional value the eNaira would bring.

He said, “A great deal of sensitisation and awareness need to be undertaken to generate trust and confidence in this new payment system initiative.

“International investors typically would prefer a currency that is acceptable globally and convertible such as the dollar.”

He observed that many Nigerians were still trying to understand what the eNaira really entailed. A financial analyst and Senior Lecturer at the Pan Atlantic University and a financial analyst, Dr Olalekan Aworinde, said there was a need to do more sensitise the public more on the risks.

He said, “I think that the CBN should be aware of the fact that there is the risk of cyber attacks with the introduction of the eNaira.

“As a result, the CBN needs to properly educate the masses on how to use the eNaira in a way that would not put their safety and the safety of their funds at risk.

Another expert and the Chief Executive Officer of SD&D Capital Management Limited, Mr Idakolo Gbolade, also said there was the need to sensitive the public the more.