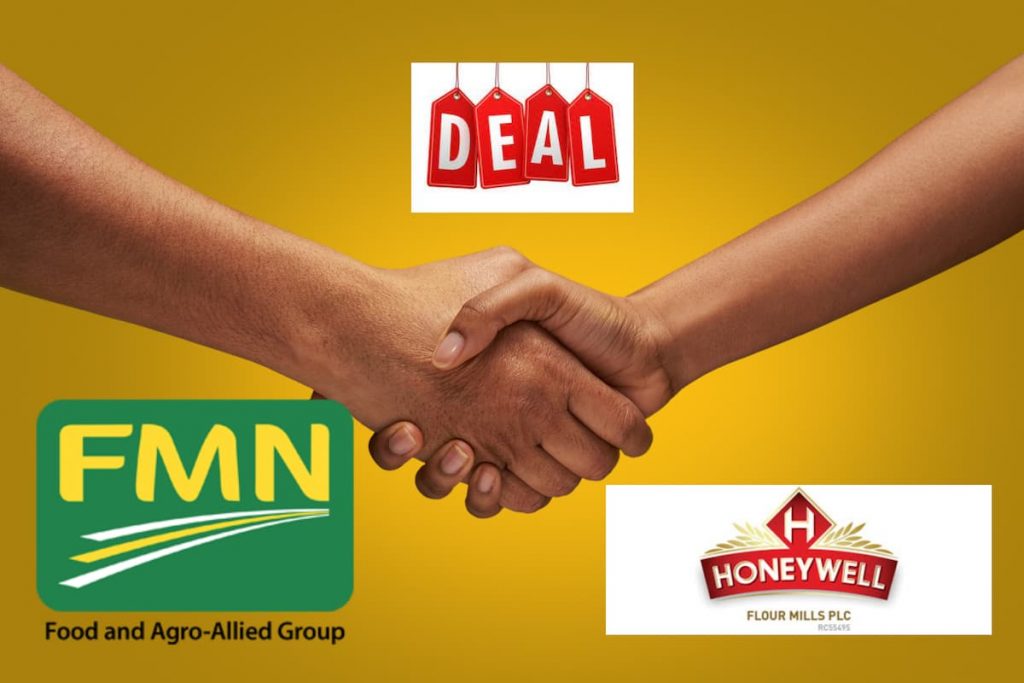 The agreement enables Flour Mills to purchase 71.69 per cent stake in Honeywell, while a separate pact with FBN Holdings Group allows the miller to acquire the financial services group’s stake of 5.06 per cent in Honeywell, bringing its consolidated holding in Honeywell to 76.75 per cent, according to a regulatory filing at the Nigerian Exchange Limited on Monday.

That could mean Flour Mills will be taking over about 6.09 billion units of Honeywell’s 7.93 billion ordinary shares, priced at an opening price of N3.39 per unit on Monday.

But the disposal of the 71.69 per cent stake by Honeywell will be conducted on the basis of an enterprise value N80 billion.

The transaction, according to Flour Mills in a regulatory filing signed by Umolu Joseph, its Company Secretary and Director, Legal Services, is in line with FMN’s global growth strategy.

The press release also mentioned that the transaction will create a stronger company in the food industry. It stated, “The proposed transaction will combine two businesses with shared goals and create a more resilient national champion in the Nigerian foods industry, ensuring long-term job creation and preservation.”

Investors have reacted to the news as HONEYFLOUR has rallied at the start of the trading session, trading ₦3.72, up 9.73% as of the time of this writing. FLOURMILL remains unchanged so far.

As previously mentioned, HGL will dispose of a 71.69% stake in HFMP to FMN based on an enterprise value of NGN80 billion. The press release further stated that the final equity price per share payable will be determined based on HFMP’s adjusted net debt and net working capital at the date of completion.

According to the press release, “The country and its food security agenda will benefit from both companies’ focus on developing Nigeria’s industrial capability, its agricultural value chain and specifically backward integration of the food industry.”

Honeywell currently has a debt balance of N78.5 billion and a cash balance of N27.3 billion as of the latest results. Flour Mills is also debt-laden with about N142.8 billion in debt and N52.6 billion in cash. It is unclear how Flour Mills paid for the acquisition. Our initial prognosis suggests this transaction is funded from debt.

Included in Honeywell loans is a N10.4 billion loan from First Bank, N2.3 billion from Bank of Industry, N6.2 billion from Fidelity Bank, and N3.5 billion from Polaris Bank. This is based on its last audited accounts for the period ended March 2021. Flour Mills on the other hand owes about N50 billion in several intervention loans to Bank of Industry and the CBN. The company also has another N68.6 billion in commercial papers and bonds.

Speaking on the transaction, Honeywell Group Limited Managing Director, Obafemi Otudeko stated, “Today’s announcement is in line with the evolution of Honeywell Group and our vision of creating value that transcends generations. For over two decades, we have supported Honeywell Flour Mills to build a strong business with a production capacity of 835,000 metric tonnes of food per annum.

“Following the transaction, Honeywell Group will be strongly positioned to consolidate and expand its investment activities, including as a partner of choice for investors in key growth sectors.”

Omoboyede Olusanya, Group Managing Director of Flour Mills of Nigeria, had this to say, “The proposed transaction is aligned with our vision not only to be an industry leader but a national champion for Nigeria. We believe that this will create an opportunity to combine the unique talents of two robust businesses.

“As a result, we will have a better-rounded and more comprehensive skill set available to us as a combined diversified food business, thus enabling us to better serve our consumers, customers and other stakeholders, whilst providing employees with access to broader opportunities.”

The press release also stated that the scale of the transaction provides employees of the consolidated company with more career development opportunities in a larger organization, with the potential to create more jobs in the economy as it will have more brands and categories, and a larger and more geographically diverse footprint.